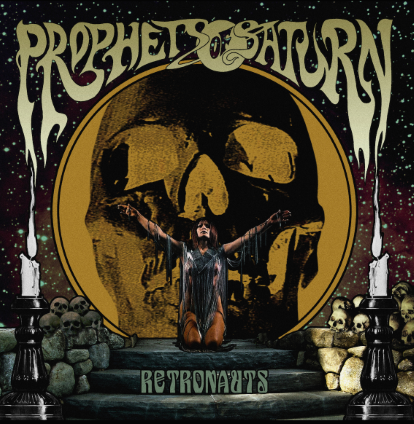 Fuzzed up greatness from the East Midlands, via outer space, naturally

The natural place to start with this is at the end. Or to be exact, two minutes forty six seconds into the last track, “Damavand.”

For the previous two minutes and forty five seconds it’s been building up to something in a kind of eerie, other worldly type of a way, then all of a sudden, as if from nowhere, there comes a thud that might have even scared Sabbath on their early albums and the great, sprawling epic is underway.

“Damavand” is a quite fabulous and intricate piece of work, meandering, thumping and built around George Sanderson’s half chanted vocals. Ploughing it’s own very sweet furrow for 16 and a half fantastic minutes it brings to a close a wonderful four tracker.

Not that the other three have been bad. And don’t make the error of thinking this is an EP. It’s an album in every sense and it’s a magnificent journey. Beginning with the fuzzed up riffery of its title track, it comes from seemingly a different place to most doomy/psych stuff does, there seems to be a sort of space like quality here as if music isn’t just played but channelled from some very strange places indeed.

Much of this is down to Ben Shone’s distinctive guitar sound, fuzzy yet familiar, he is to the fore again again on the ebullient grooves of “Ultra Wizards,” which doesn’t shy away from comparisons with the likes of Pentagram, rather it embraces it’s influences and takes things into areas that few bother to investigate.

The other track here, and the one which completes this stunning quartet, is “Witchrider.” At just three minutes long it is – in terms of length at least – at odds with the other songs here, but that does not make it any less thrilling as it brings with it a kind of urgency.

Able to call on Tony Reed (Mos Generator) for mastering duties at his Heavy ahead studio in Seattle, Prophets Of Saturn have constructed something that is brilliantly bewildering. A year with some stunning releases already just got itself another gem.