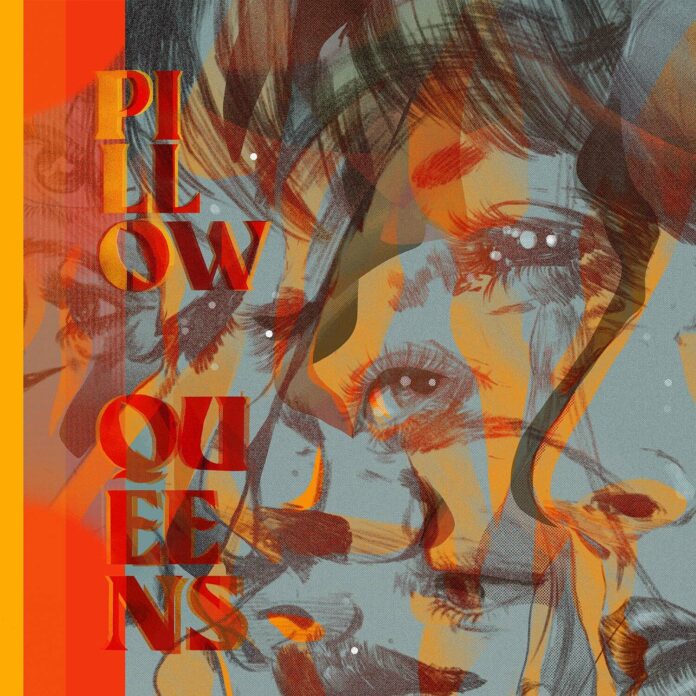 Pillow Queens are an Irish indie rock band from Dublin, formed in 2016 and comprise of Pamela Connolly (bass, guitar, lead vocals), Sarah Corcoran (guitar, bass, lead vocals), Rachel Lyons (drums, vocals) and Cathy McGuinness (guitar, vocals). Their debut album `In Waiting` was released in 2020 and they now have their follow up `Leave the Light On` which was released earlier this month.

The album opens with `Be By Your Side` with its resonating guitar riff and a drum beat at its heart. It`s a song, according to co-lead vocalist Pam, which is about “the mechanisms that are used to hide your vulnerabilities and carry on.  But also, the feeling of being about to burst and how cathartic it could be to allow yourself to let your emotions out and feel the world around you”. The undulating vocal delivery is a joy throughout this number which does seem to ebb and flow as it progresses and is wonderfully anthemic and has some enchanting vocal harmonies.  We have a track about  the commitment and emotional support that is needed being in a band with `The Wedding Band`, A quite pounding, thumping offering not belligerent but almost defiant in it`s execution.  I can only imagine that being in a band must be akin to a marriage and has all the associated difficulties.

`Hearts & Minds` is a mid-paced rock out and relates to the feeling of being a teenager again and also the insecurities about body image and ability when it comes to being a musician that’s seeing themselves recorded and pictured, as well as commented on. Something that myself being male have very little understanding of and made me pause to reflect on a point of view that I’d probably never considered or understood.  There`s a real change of pace with `House That Sailed Away` which is almost a laid back nigh on dreamy slice of Americana, a ballad that tells of a romance that shifts from romantic to platonic.

`Delivered` is initially quite stripped back with a continual guitar riff and vocal but gains some complementary harmonies and a pounding leading drum beat. A composition about recognising that coming to terms with who you are and accepting it will almost ensure a good state of mental health. Again `Well Kept Wife` is on the surface a quite captivating mesmeric listen but relays a story of somebody who seems to have it all but when the veneer is peeled away things aren`t quite as they appear to be.

`No Good Woman` is a fairly observational offering with vocals that veer towards a frustration in what they witness and convey along with some blistering guitar chords along route. I read that the band had wanted Historian` a song about finding love when you`re not expecting to, to sound like it was tender and delicate but with moments of chaos and it certainly does. It begins quite gently before deviating between more insistent powerful textures and lighter mellow introspective segments. A quite compelling listen.

`My Body Moves` is another fairly pensive reflective number that seems to touch on lasting love and growing old. The album closes with `Try Try Try` which I felt was fairly brooding and intensive, which is probably understandable as it relates to trying to support a close friend or partner almost at the detriment of oneself.

`Leave the Light On` is an album that will leave you with more questions than answers. I found it had a vulnerability about it and seemed deeply self-examining at times. It`s a much more mature offering than their debut album and it`s the sort of submission that you`ll need to return to repeatedly to fully appreciate what`s been shared here. To me it had an almost yin and yang vibe in that the first few songs were faster, lighter, and more uplifting and the latter songs more thoughtful, reflective, deep  and mediative. I found it very open and exposed at times and it takes something for a band to extract that sort of emotion from a listener.