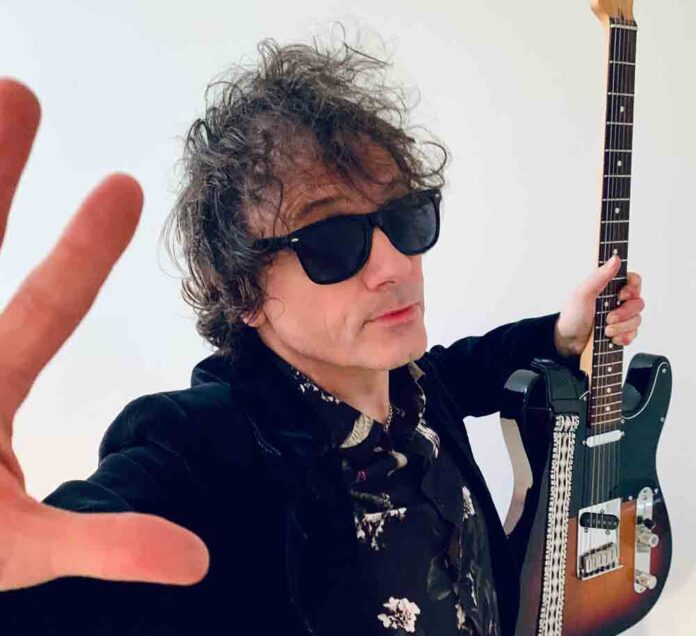 ‘Last Train Tonight’ is the debut solo single from UK songwriter Marc Valentine. Released on 1 April through his own Arcane Wires label, it’s taken from his forthcoming album Future Obscure.

As frontman of cult British power-pop outfit  Last Great Dreamers, Valentine has brought sparkle to venues and turntables alike with his distinctive vocals, wry charm and songbook of secret classics. Now, with his favourite guitar in tow, he’s heading out on a solo adventure, loading his flight case with a fresh set of tunes, and polishing the trademark twinkle in his eye.

Says Marc: “A twist of fate and the things we can’t control. Taking the wrong way home and crossing paths with a bunch of midnight meatheads who can’t comprehend a guy in eyeliner. Demolition smiles and grunting fists, as you fall to the ground with the smell of blood, sweat, piss and beer in your nostrils. I’ve been there once or twice, but somehow always managed to make it home.”

Debut solo album Future Obscure sees Valentine building on his past while expanding his sonic palette, to craft a collection of should-be hits – 7-inch-shaped songs that move both body and mind. Recorded and produced by Dave Draper (Wildhearts, Professionals), and featuring collaborations with Wreckless Eric and The Boys’ Matt Dangerfield, this is a reflective, sometimes defiant album in the golden-era tradition – a pop record from the heart, packed with songs to holler, heal and hold.

‘Last Train Tonight’ is available to presave through all the usual platforms here https://artists.landr.com/692531421425