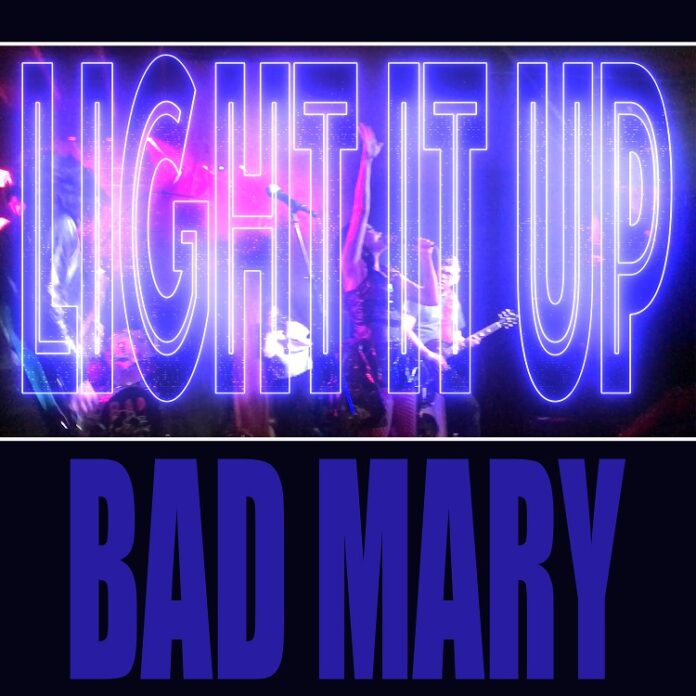 New York-based Bad Mary releases their first new song of 2022, “Light It Up” which will be out on April 26, with an accompanying video. Pre-save it at your favorite platform here: https://distrokid.com/hyperfollow/badmary/light-it-up

About the new song singer Amanda Mac says, “After writing a space punk rock opera (The Return of Space Girl) and releasing an EP of covers (Rock and Roll Classics Vol. 6), we wanted to write some fun songs that really represent what we do and who we are as a band. With “Light It Up” we wanted to write a rock and roll song about rock and roll, and how we get on stage and let the energy and enthusiasm take over. It’s a song about doing things our way. We also wanted a new high-energy song to open our shows with… so there’s that too!”

“Light It Up” follows the release of Rock and Roll Classics Vol. 6 where the band pays homage to songs that span from 1967 to 2007. The EP features their take on Blondie’s “One Way or Another,” Splendora’s “You’re Standing On My Neck” the theme from MTV`s Daria, Miley Cyrus’s “See You Again,” Jefferson Airplane’s “White Rabbit,” The Human League’s “Don’t You Want Me,” and The Police’s “Next To You.” About the EP Dancing About Architecture said, “What turns rock classics into new sonic experiences? How do you make such songs bigger, heavier, more impactful perhaps even more fun? You give them the Bad Mary treatment“

With a pedigree that spans generations, Bad Mary is far from conventional. The band features lead vocalist Amanda Mac, with her husband Mike Staub on bass, her dad Bill Mac on drums, and her Hofstra University professor David Henderson on guitar.

Alternating between punk, pop, and spicy rock n’ roll they plan to continue to release music throughout the year with touring to coincide. “We’ve been working on a lot of music. We plan to release another new song in May, and an EP, Trash and Glamour in the fall of 2022. Get ready to see some new videos and we’ll be performing these on our weekly twitch streams too” says Amanda Mac.

The band released their first album, Better Days in 2013 and followed it up with three fast and loud EPs, Killing Dinosaurs (2016), We Could Have Saved the World (2016), and Glitter Bomb (2017). In 2019 Bad Mary released their latest album, The Return of Space Girl, a 33-minute punk rock space opera, followed by an award-winning animated movie of the album.

They can be heard regularly on SiriusXM’s Little Steven’s Underground Garage, and you can catch their weekly live stream on Facebook, YouTube, Patreon, and Twitch on Tuesday nights at 8 pm EST – https://www.twitch.tv/badmaryband.

“Since the pandemic shut down live performances for a bit we turned to Twitch, and we’ve built a great family of viewers! We play a full live show for about an hour each Tuesday. The audience can make emotes splash on the screen, chat with us, and request songs! It’s so much fun” says singer Mac.