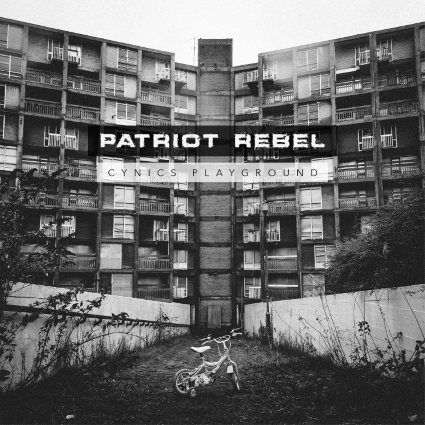 The life of an aspiring rock band is a tough one. Take Patriot Rebel.  The Nottinghamshire mob have been busy. Over the last few years they’ve supported everyone from s of Y&T, Tesseract, The Treatment, Jettblack and Skarlett Riot. And it wasn’t too long before the aspiring rockers sold out the legendary Rock City.

But what do you do when you want – as Nickelback might have said – to be big rock stars. Or in this case, when you want your own star on Hollywood Boulevard but re stuck on the Talbot Road?

In the case of Patriot Rebel the answer is as simple as it is resounding. You just simply make a record so big that it tells everyone you aren’t going to die wondering.

The five tracks on “Cynics Playground” do everything massively – and do everything brilliantly well. The thought that they’d quite like to be a Brit Alter Bridge is never too far away, but on the last song here, “Miss-Guided” they become fully realised.  Singer Paul Smith adopts a fully throated Myles Kennedy like roar as David Gadd’s licks soar behind him.

In truth this is merely the culmination. The rest of the record is just as good. “Digital Mannequins” begins in excitable fashion, and there’s a confidence about the wrecking ball like intentions of its grooves that suggest that everyone here knows they’ve been involved in something pretty special.

The first single lifted from EP number two, “Self Hate” puts despair to a skyscraper riff, “Dying Breed” is a ballad so huge its designed to be sung by 10,000 at Wembley, while “All I Want” will probably get what it asks for if there’s any justice in this world.

Doom mongers love to tell you that rock is dying and once the current breed of big beasts goes, there’s nothing to take their place. The thing is, not even Lemmy lives forever and rock will carry on regardless. There’s the likes of 48 Hours and Jupiter Falls flying the flag for the new breed, and you can add Patriot Rebel to that list, because “Cynics Playground” is quite brilliant.