Since embarking on its Black Metal crusade in the winter of 2012, CVINGER have made headway in the Metal underground by evolving their musical and production abilities with each title they have released, this evolution is evident from the title track, which serves as a prelude for whats to come on the full length. Not long ago returning from their headlining Black Flames over China tour, the time is now right for CVINGER’s to unleash their second full length album “Embodied In Incense”.

“Embodied In Incense” is set to be released in Spain on May 23rd & Worldwide on May 30th through the Spanish label
Art Gates Records. 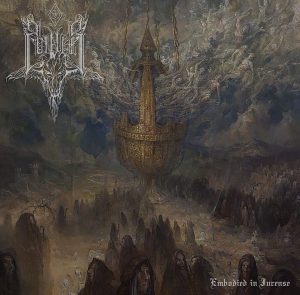 The cover art for “Embodied In Incense” was painted by Italian master Paolo Girardi and represents the last step on the journey of departing from, fear, hate, love, humanity, conscience and all the emotions that misguide us with subjectivity and temptations which are our worst enemy and a gateway to self destruction.
TRACKLISTING
I. Chapter 1: Conjuration Of The Dead God
II. Psalm, Of A Hollow Man
III. Beheading The Desert Prophet
IV. Enchanted Conclave
V. Weak To The Gallows
VI. Chapter 2: Eye Carved Upon The Serpents Stone
VII. Martyr Shrine
VIII. Infinity Of The Black Flame
IX. Embodied In Incense