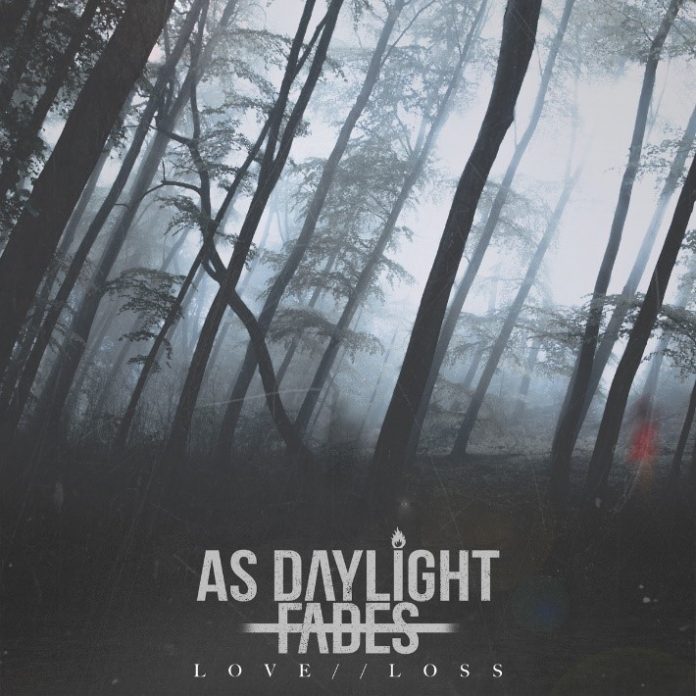 Glasgow metalcore mob talk you through their latest

Hailing from Glasgow, As Daylight Fades’ bluntly titled Love // Loss, is as bleak a musical proposition as such a thematic suggests. Boasting four metalcore tracks audibly soaked through with frustration, thundering riffs and breakdowns provide a furious backdrop for Clarke’s desperate vocal tirades: “The lyrics cover the idea of facing the world alone, and the challenges you’ll face whilst doing so,” relays the singer, “Everything comes to an end.” Ahead of its release in May, the band give you an insight into the EP, track by track…

The Great Divide is about the separation and distance we feel when you’re at your lowest and alone without help. The song was written as a way of venting a lot of emotions whilst I was suffering with depression. The lyrics were written a while back when I was feeling lost and wasn’t really sure on the direction my life was heading. It also – on a personal level – is directed at certain people in my life at the time I felt were dragging me down or had given up on me, or pinned me as a lost cause. Hence the lyric “I guess that you forgot about me”. It also refers to the idea of reforming to people’s ideology of having to dress or look a certain way to have to fit in with a crowd. Fuck all that, you are you because you are your own person don’t let anyone change who you are. If anyone tries to, they don’t deserve to be a part of your life.

The track itself complements the lyrics with its heavy riffs and fast pace. Recording guitars took quite a bit of time but it was worth it when we heard the final product. When I visioned how the track would sound in my head to the final product it out weighed anything I had expected and collectively as a band we are ecstatic about the track being released alongside a music video of live footage from our recent European Tour. It’s always great to play this live as it’s a song I hold close to my heart and can connect with on an personal level. When I’m performing this live I feel like I’m describing my life at it’s lowest point. In a way, performing it live helps to remind me how far I’ve come.

This track was our first release off of the upcoming EP and the response we’ve received so far had has been unbelievable. The song title is a perfect definition of what the lyrics express – “desiring or seeking powerful change in one’s life, behaviour and situation” It presents the real life struggle of losing someone you love and trying as much as humanly possible to fill the void of absence -alas, being emotionally unstable to an extent where one is incapable to move on. The separation between yourself and another person whilst dealing with the undeniable realisation that the ending would and could never be worthwhile. We are so grateful towards fans that have learned the lyrics to this song, it’s a pleasure to play live and the rewarding feeling we get when watching the crowd sing back to us is emotionally outstanding.

The songs lyrics are quite self explanatory and really get at what the songs about whereas lyrics on our other tracks subtly allude to my feelings at the time. Hope//Less Is about regretting past decisions and mistakes and realising that you don’t know what you have until it’s gone. This track on the EP is probably the most in your face and that’s how it was intended to be when it was written. We wrote it as a band from start to finish rather than piecing together sections that we’ve recorded at home which never really works for us. I think that’s why it flows so well considering we planned it from start to finish before even writing the riffs. Again, recording guitars took a bit of time since we opted to record each group of notes individually to ensure it was as clear as it could be. This involved being hunched over a chair that had no back for a few hours but we were blown away by the final master. Playing the song live is always fun it lets our fans and people at the gigs vent a lot of anger and aggression as it’s one of our heaviest of the 4 on the EP.

Dreamweaver is the last track of the EP and acts as a conclusion to the tracks previous to it. It started off as a lead line we wrote a while ago and it just blossomed from there. It’s one of the more hard-hitting tracks of the EP with a strong intro that comes back in as in outro and round off the EP. The track is about waking up with the realisation that dreams you chase become warped with ideological ideas of happiness. It portrays the journey of trying to find something with a meaning to your existence and why we are here. Playing it live is great because it always gets the crowd going and there’s always a certain buzz on stage during the intro that I can’t quite describe, I think it just means a lot to us and we can really get into it. The final master really changed the vibe of the track too, the leads were more subtle than we expected which really added to the feel of the song.