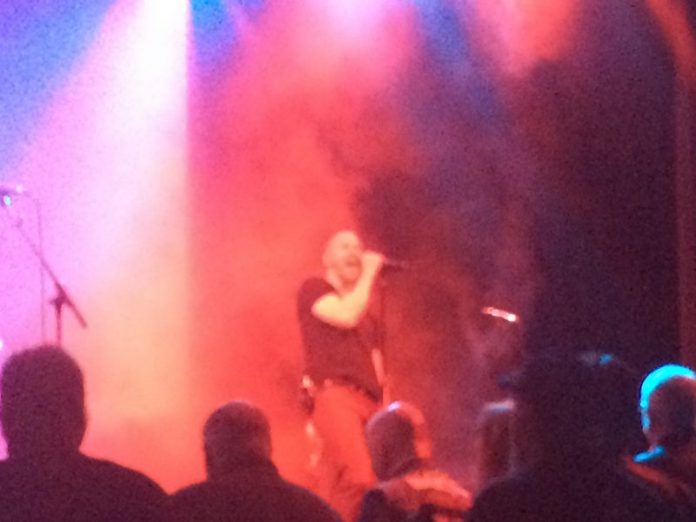 It’s a fair bet that on an evening of NWOBHM that – along with a lot of denim and patches –  you’ll hear the phrase “this one is from our first album, we’ll take you back to 1983”. It takes Dave Wilkinson, singer with Sunderland’s Spartan Warrior, 10 minutes to say it. They follow it up by playing a song called “Breaking Sweat” which sums up not only their outlook, but also their sound, as it is excellent. Their as yet unreleased new album is represented with Wilkinson explaining that the track “Court Clowns” is inspired by “Fucking Clowns” is dedicated to people that abused him online – it spits all the bile that you’d expect and hope – while “Covered In Lust” comes at things a little more like Motley Crue’s first album but is no less entertaining. Spartan Warrior appear to be flying their flag and ready for battle again.

It’s a similar story – and sound – for Witchfynde. The Derbyshire mob were there when the New Wave Of British Heavy Metal really was the new wave, and now they are back, reformed and ready. There’s enough original members here to make this the real deal, too and there’s an authenticity to the sound of songs such as “Give Em Hell” to keep this most classic of sounds feeling fresh. Likewise “Cloak And Dagger” and the dark “Conspiracy” have the right mix to create an intoxicating brew.

Salem’s singer Simon Saxby seems to know this is all about context. The bands singer since they formed in 1979 still has a very decent head of hair. “It’s great to see so many metal heads here tonight,” he says. “Usually I’m just walking around Sainsbury’s with my grandchildren. Can you imagine what a twat I look…..?” It’s also fair to say Hull’s finest take the showmanship up a notch too with a 50 minute set that is tremendous fun. Kicking off with the title track of their most recent record “Dark Days” they race through work like “High Stakes” (“it’s about a butcher that’s really short,” offers Saxby). They afford themselves some solo spots in “The Other Side Of Hell” and the slower “Break The Chains” features some neat twin guitars. They are back to heads down heavy metal for “Hangman’s Noose” and that’s yer lot from Salem.

If all the bands tonight have gone away then come back, then the same is true of Diamond Head. The West Midlands stalwarts have been largely off the grid for a while but have just released their best album in years and years with new singer Rasmus Bom Andersson. These shows represent their first chance to show that new material translates into the live arena. It does, and the Head sound better than for a very long time.

With just an hour here, they play a kind of festival set. Kicking off with “Play It Loud” they deftly mix the old with the new and sound – and appear – totally reinvigorated. So for every “Borrowed Time” style oldie, there’s a highlight from the new record like “Shout At The Devil” and “Bones”.

Best of all the new songs is “All The Reasons You Live” which comes alive here, while the likes of “Lightning To The Nations”, “Its Electric” and of course “Am I Evil?” show just why this band is both so revered and so loved.

It’s more than that though, because as the encore of “Helpless” ends the evening and sees the new singer running round the stage with bassist Eddie Moohan with childlike glee, the metaphor is not lost. The old has seldom met the new so well, and while Diamond rightly recognise the past, they are a band still with so much to offer.