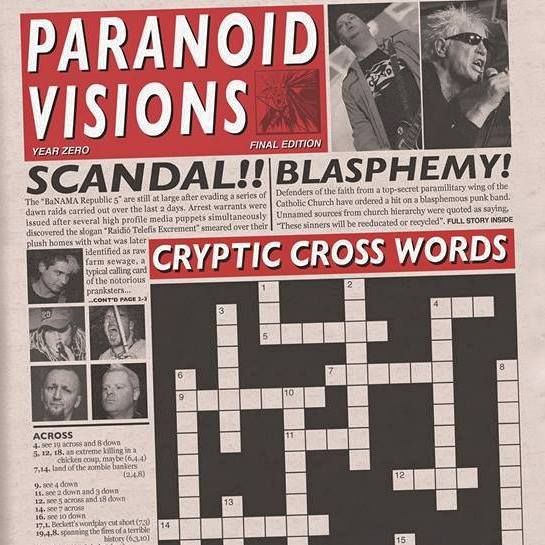 Formed in Dublin in 1981,  Paranoid Visions were soon allying themselves to the anarcho punk fraternity of the second wave of punk rock in the early 80’s.

The first track is quite a brutal opening called The Angelus @ 6pm, which deals with a daily reaction to an implied sexual interference the narrator suffered many years ago by what I assume was a priest and the incarnation of the Angelus each day resurfaces those terrible memories. Deko Dachau`s vocals are perfectly growly enough to express the distress that is recounted against a version of the Chopin`s funeral march.

Next up is Anagram Sam another song that makes the best of Mr Dachau`s vocals and Jay Suss Christ`s bashing of the skins. At times it reminds me of Dark Entries by Bauhaus, which in my opinion is no bad thing.

Across the Holocausts is next with lead vocals from Aoife Destruction, a really upbeat ska inflected tune recalling the problems in the Ukraine and reflecting the similarities to the holocaust and passed inhumanities. The church gets a bash once again.

Murder most foul recounts slaughter carried out by sick and evil men. A tough subject but carried along with the wonderfully haunting guitar of P.A. Shared vocals by Aoife and Deko really compliment each other. Deko`s vocals remind me of Andrew Eldritch from the Sisters of Mercy, another band I love. A song recounting the fall of society where a man is driven to take the law into his own hands in a brutal way to deal with intimidation is recalled in Anger Turns to Rage. The tune carrying it, is a straight up hey ho lets go Eighties Punk anthem.

Paranoid Visions follows with Deko and Aoife taking turns to express their reasons for playing in a band rather than working a nine to fiver. The interaction brought memories of local Birmingham band, the Au Pairs and how Lesley Woods and Paul Foad used to trade vocals.

The drudge of a job and subservience to the system, where life passes without a sense of freedom or an enjoyment of life is covered in the anthemic Mutant Circus !!

Love letters is carried along with the steady and solid bass from T.J.QRA. An interesting song which covers all aspects of love from straight relationships, gay relationships to self abuse. Halloween is next up and relates that it is the one day when people take off their masks and expose their true selves, which can be a worry in itself.

I must mention two people who play a significant role in this release. The excellent guitar playing of Danarchy and the various samples that pop up along the way and brought to us by Steo Pain.

The closing track is a pretty harsh statement on the State of the Irish economy in Ba-Nama Republic relating to the defunct Celtic Tiger, the sale of national assets, Quangos, offshore oil sell offs and Ireland’s tax incentives. Pretty bleak but carried off by the wonderfully rich vocals of Aoife, sounding a little like Sinead O`Connor in parts.

So overall my introduction to Paranoid Visions has been a brutal one but enjoyable all the same. The album covers some difficult and harsh subjects but it is a wonderfully diverse musical masterpiece. I wasn`t sure at the start but it`s a real grower and you`ll end up humming some desperate statements along to some really catchy tunes.