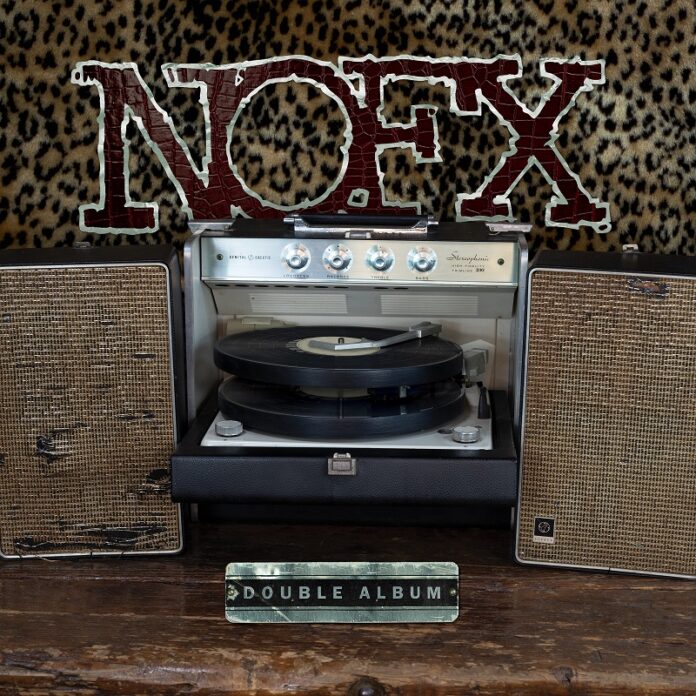 After the five year gap until “Single Album” last year, NOFX have resumed normal service with “Double Album”, both in terms of the gap between releases, but also the sound and the fact that no one does it quite like this:

Enter “Fat” Mike, the bands main man: “I really like Single Album a lot. I like every song, but the songs on Double Album aren’t quite as good. All these songs were recorded in the same month, but I didn’t finish the second album until two years later. I think it’s a very enjoyable album, and maybe our funniest. I think it is what a lot of our fans will want to hear. I think it’s a great side three and four for a double album. I believe I accomplished my goal of making a solid double-album, but it just took a lot longer than I expected.”

It beats the shit out of those bands that want to tell you how “stoked” they are and how this “is the best album of our careers” and all that cliched crap.

In the end, you can save yourself a lot of time and trouble with NOFX and cut straight to this. Half way through, there’s a song called “Is It Too Soon If Time Is Relative?” It destroys Stephen Hawking, thus: “When I saw him on TV/ I thought he looked crazy/Then my friend John told me that he’s just really lazy/So lazy he could only write A Brief History of Time/ He may be smart but to me he’s just a creepy narcoleptic mime”

Now, you’ll either get it, think its funny and love the rest of it, or you’ll hate it, find it offensive and write to your MP in protest. Either is fine and NOFX are cool with that reaction.

Assuming you’ve stayed then what you are staying for is basically NOFX being NOFX for 28 minutes. That means the “orange county” sound is in full effect for “Darby Crashing Your Party”. You know the drill, you know the big bands that were influenced by NOFX and play arenas now. Then you get to “My Favourite Enemy” and sort of understand why.

The searing honesty in the words of “Fat Mike”, who battles addiction and depression,  who is open about his alternative lifestyle. This might sound like The Offspring, but listen to the words. “I’ll always be my own worst enemy” and he lays it all bare here.

Some of these songs go way back. “Punk Rock Cliché” was written with Matt Skiba and was originally slated to be on Blink182’s new album. The two bands don’t get on and they pulled it from the tracklist, so NOFX got it instead (and in true style Mike reckons the Blink version is better).

“Fuck Day Six” is another highlight. Written about Mike getting clean in a buddhist retreat it manages to mention both “jerk off socks” and “Mexican food”. The two aren’t connected….(and we can stand by for another Less Than Jake song about it too, I guess, to follow up their “Fat Mike’s On Drugs Again”).

There are many “wow!” moments here. Like, “he didn’t just say that did he?” He did. Fat Mike Burkett always says it. “Alcopollack” takes down their Booking Agent (apparently with his blessing) “Three Against Me” is a harrowing account of his upbringing and “Gone With The Heronined” ends the album in a style that befits its title.

And the thing is, somewhere along the way, some brilliant punk rock songs break out. The LA punk sound is clearly defined and one of its defining bands is right here. Ultimately, this probably isn’t getting them new fans and if you hated NOFX then you won’t be going on a Road to Damascus style conversion, but if you are down with this, “Double Album” is as good as it gets.