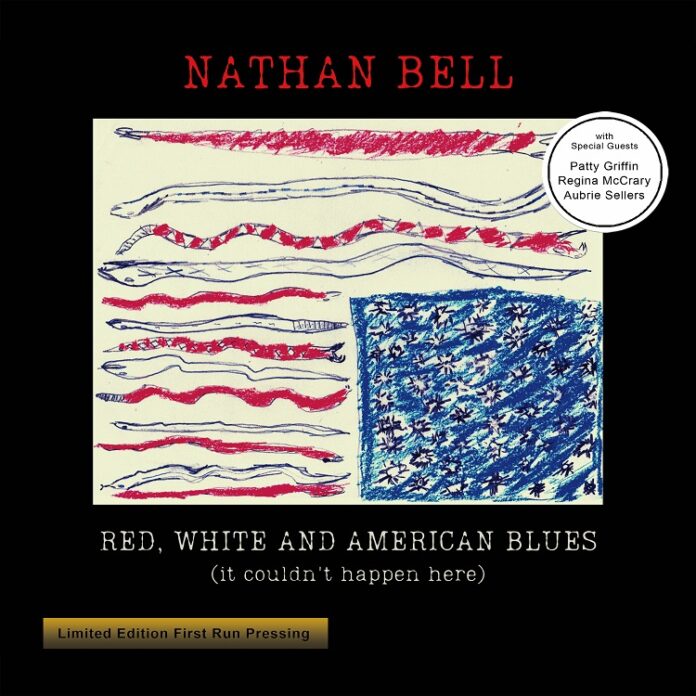 Thanks to a Billy Bragg album that was released last year, I found out that I was an “autodidact”. It means, basically, I have to know stuff. Like, they’ll say on TV, at election time say, “it’s the second safest seat in the country” and my phone will be in my hand while I search for the first.

As afflictions go pretty cool, and occasionally, it throws up a gem. I was listening to “Red, White And American Blues” in bed on New Years Eve (because I am painfully dull) and the opening song “Angola Prison” came on. I have a need to know whether it’s a real prison – it is, it’s in Louisiana – and on Google they had the opening times and it said: “please note New Years Eve may affect these”. A bit like that bit in “Jailbreak” by Thin Lizzy were Lynott sings “tonight there’s gonna be a jailbreak, somewhere in the town.” I don’t know about you, but I’d check the jail.

This type of stating the bleeding obvious, isn’t Nathan Bell’s stock in trade, though. Listen to the 13 songs he’s crafted for “Red, White and American Blues (it couldn’t happen here)” and to do so, is to be taken on a journey. A frequently depressing, but always interesting and incredibly compelling one, mind you.

On his website there’s a quote about his work that says this: “Nathan Bell is not a protest singer, but rather, an attentive seismograph of social decline” and that’s true. He’s one of the singer/songwriters that isn’t afraid to give his world view in these songs, in these characters, and in these stories. There’s more to it, though. This was written in 2019 and then a pandemic got in the way. These words, they ring true – and possibly even truer – than back then. We’ve got war criminals being knighted after all, hundreds of thousands of people dead and the billionaires have piled on staggering wealth. And there’s a sense of that anger, that hopelessness, throughout.

This is not, however, some polemic. These are songs of incredible texture and skill. Not least the dark blues of the aforementioned “….Prison” one of the albums most immediate tracks. Don’t make the mistake, though, of thinking this is Bell. It’s not. Nathan Bell, across this album, proves to be some kind of shapeshifter, a chameleon, and this is a maze of things.

It’s barren and sparse, as on “American Gun”, it moves into jazz on “American Blues (for GSH)” and yes that stands for Gil Scot Heron – this revolution isn’t to be televised, however. It’s got to happen underground. It’s powerful stuff too. “the church rapes the children its paid to educate” – and the theme of organised religion is one that is returned to before the end.

“Retread  Cadillac (Lighnin’) tells the story of Lightnin’ Hopkins and there is a stunning harmony vocal from Regina McCrary in this that takes it to the stratosphere. Patty Griffin (who was on “…Gun” as well) puts in a first rate performance on “A Lucky Man (for my father, the original Dead Man)” written before his father died and with such adept poetry.

“Wrong Man For The Job” moves into pulsing, rocking blues, and its not hard to see it through a Trumpian lens, I suppose, but it could be anyone. It’s just angry at anyone that deserves it.  “When You’re Dead (Ghost reflects on his dire circumstances)” is as hypnotic as it gets, but the author – and its easy to see these as short stories – puts it, “we were all ghosts in 2020.” Maybe we still are? As it suggests: “nothing else can kill you, when you’re dead”.

“Mossberg Blues” – another featuring McCrary – deals with the futility of trying to change the future, and if one thing I’ve neglected on this review so far was to talk about Bell’s playing, then his guitar here is stunning.

That chameleon thing? Well listen to the soul filled blues of  “Monday, Monday (the bony fingers reprise)” and wonder where it had been the rest of the record. A tribute to Jimmy Reed and others, its fantastic, and the counterbalance, perhaps is “To Each Of Us (A Shadow)” the final one to see Patti Griffin sing with him and its beautiful bleakness, is but another high point in an album full of incredible high points.

The final one “Folding Money (You Better Move Along)” is another excoriation of organised religion. “Jesus don’t like your folding money, or the way you use his name” rages Bell, with real feeling – and maybe, as we started with a mention of Billy Bragg, we should end with one too, maybe this is – to quote a song he plays at most gigs – written by someone who knows the real power is in a union? And not in a system that works against them.

And maybe that’s the best way to look at this record. They hate us. They make money off our misery. We have each other. Be part of the change. It can happen here.