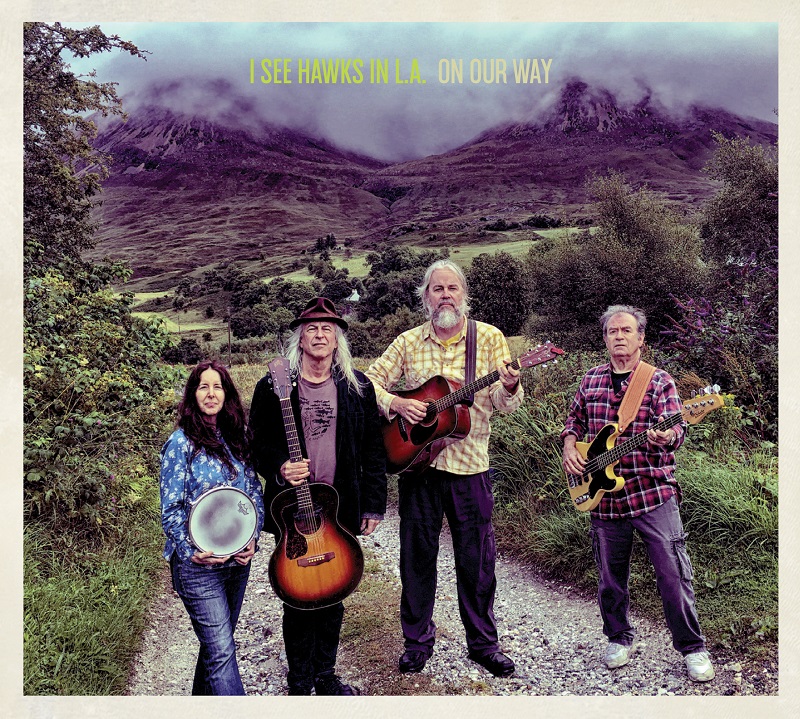 I am, as any right minded person should be, a fan of I See Hawks In LA. I’ve only seen them once, on 30th July 2018. The world was a different place then.

The gig though, was, as I put it in my review: “as genuinely lovely as 80 minutes gets” and it’s the warm, gentle feel of the songs that Rob Waller and Paul Lacques, bassist Paul Marshall, drummer Victoria Jacobs and whichever guest they can rustle up – and this album has the usual raft – create.  How would they get the sort of organic bond they muster?

Clearly, making this record was going to be a different challenge, and have a different vibe. There were 4pm on Friday facetime sessions to write the tracks for a kick off, but in a way, ISHILA have always reflected their environment – the environment, perhaps most accurately – so this was an adaption to the new normal. And given that I am writing this 21 months into a pandemic it doesn’t feel so new anymore.

At the outset, “On Our Way” seems to be business as normal. The opener, “Might Have Been Me” greets you like an old friend, a glorious mix of acoustics, lap steel, tune and the usual quirky (perhaps “oblique” might be a better word) and the title track adds a 60s jangle, straight out of Laurel Canyon. In another time, you can imagine them all, sat cross-legged round Joni Mitchell’s house on a blissful afternoon. Here, Waller sings “I don’t know if the spring is coming”, but it feels like he’s ready to take the consequences, whatever.

And if “Know Just What To Do” starts like some demented ceilidh, then its another with a psychedelic feel, but that “avant garde” (as the band put it) fíddle at the start of the track? That’s your signpost that this is a more expansive band than you might have expected.

“Mississippi Gas Station Blues” kind of sounds like Dylan around the time he spat the words “play loud” and invented punk (that’s my thesis and if someone pays me so I can quit my job to do a doctorate on it, I will prove it) but then it turns into The Doors. It’s a very odd way to spend two minutes, that’s for sure.

Jacob’s channels some kind of 60s Kinks-ish vibe on “Kensington Market” (which brilliantly pigeonholes London as “the land of tea and scones) but as an example of what this band is, and why they are unique (not a word I use lightly) then “Kentucky Jesus” is right up there. A song about Mohammed Ali from a totally different perspective and with what we might call the trademark sound, it is the best thing this collection has – although “Geronimo”, which has a similar thing in that it ponders the next move of a general – isn’t far behind.

Considering (or perhaps because of?) the chaos of the world, this feels very relaxed for the most part. “Stealing” sounds as about likely to kick up a fuss as a bloke in a hammock and with a cold drink at his side, and their fabulous storytelling is never better underlined than on the wonderful “If I Move”.  “there’s the parking lot you where told me you were pregnant, I am beginning to know this town too well” reflects the narrator over the most “country” offering on the record.

Marshall and Jacobs handle the singing on “Radio Keeps Me On The Ground (Slight Return)” a homage to the wireless in the digital age, and it’s almost like a companion piece to Springsteen’s “Radio Nowhere”.

There’s a line on the press release that was sent with this record, and it said: “new directions spun from strange times” and that has been the case here and there throughout, but the last one, the eight minute disorienting swirl of “How You Gonna Know?” that most makes you go “wow! I never saw that coming”. More Frank Zappa than country, the lyrics reflect its sprawl. It’s a departure, yes, but not so much that you don’t realise it is I See Hawks In LA.

And, in a way that reflects “On Our Way” just as much. It’s new, its fresh, but its still that lovely band you’ve always liked. It’s their journey, we’re just all on it with them.