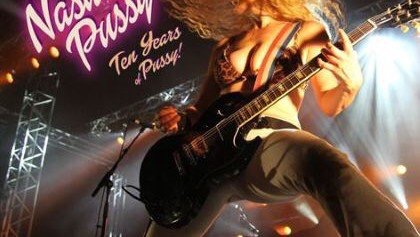 Georgia mob find its time for a career retrospective. Of sorts.

Ten years seems to fly. Especially when your band has been going for 17.
To deal with the elephant in this particular filthy room, this isn’t actually a career spanning best of at all. Rather the 16 tracks here concern themselves with everything that Nashville Pussy released on German label SPV.

This means that, yes there’s nothing from the brilliantly disgusting tour-de-force that was their debut “Let Them Eat Pussy” (fnar and indeed hehe) but there’s plenty of songs so dirty that you can probably go to the clinic after listening to it.
It doesn’t matter which song you pick, either. Whether it’s “Rub It To Death,” which begins this here thing and contains the line: “damn right this pussy’s tight” (fnar and indeed hehe) or the acoustic led “Until The Drugs Wear Off” which has its central theme as the charming thought “my wife’s out of town cuz her daddy’s just died/I got a place if you got a ride/lets get it on before the drugs wear off.” This is a supremely nasty, downright anti-social stuff.
Musically the Pussy can write a boogie like the best of them, and the vast majority of the tracks here will float your boat if you like the thought of music that sounds like Motörhead doing coke with The Wildhearts with the Georgia Satellites as the soundtrack (which actually sounds plausible enough to have actually happened). The collection choc-full of honest, dirty rock n roll. “Hate And Whiskey” has a groove to shame Kiss on “I Love It Loud” and “Pussy Time” is pretty much self explanatory and fantastically hedonistic.
The party doesn’t stop. “Pillbilly” deals with getting “aboard the OxyContin Express” and the hillbilly sleaze of “Up The Dosage” is hard to resist. Lemmy (who has gone on record with his love for the band) turns up on the swampy “Lazy Jesus” and any album with a song on it called “Good Night For A Heart Attack” isn’t looking for salvation any time soon.
Ultimately, all Nashville Pussy want to do is the be the soundtrack to your – and their own – debauchery. They explain they want to “get so high they take a shit on the moon” at one point, and even what passes for social commentary here is done so with tongues in corn dog smeared cheeks. A song about obesity in the U.S. is dressed up as a laugh and called “The South’s Too Fat To Rise Again.”
The Pussy couldn’t care less about being PC. They couldn’t care less about taste and decency. They just want to rock n roll till they can’t rock n roll no more. They aren’t taking things seriously. Neither should you. We all need a bit of pussy. Here’s to the next 10 – or 17 for that matter – years.

Previous article
Featured Band: Kamelot
Next article
Joe Out To Cause Shockwaves!