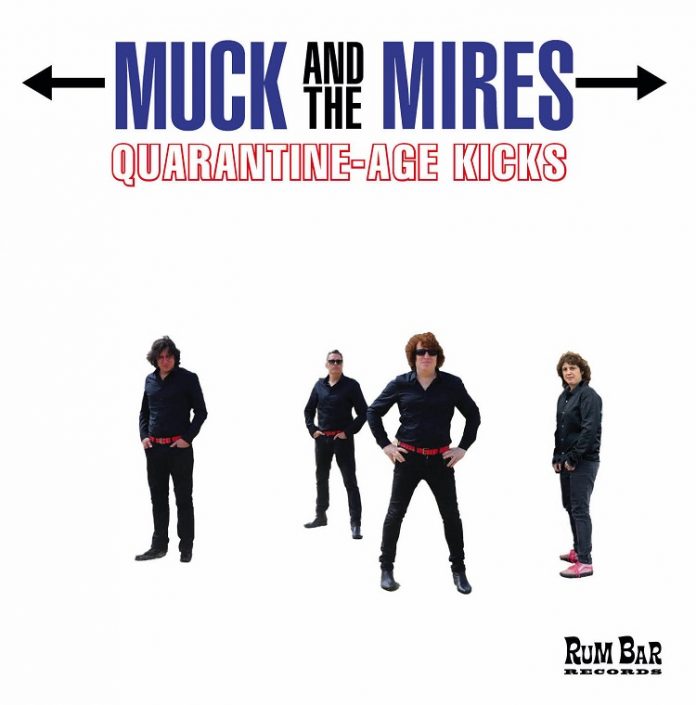 To begin with. Let’s just say my answer to the age old question of “The Beatles or The Stones?” is never hard and its never the former.

I wrote something similar when I reviewed the last Enuff Z Nuff record a couple of years or so ago, and on that I also wrote this: “But then, to be absolutely contrary, I do like bands that owe the Fab Four a debt.”

Which brings us neatly to Muck And The Mires.

The “Quarantine Age Kicks” is a collection of stuff they did on some of their out of print albums, and it is best described like this: If John, Paul, Ringo and George had jammed with Ramones (if I was being facetious I might say, if the mop tops had grown some balls….but I am not a philistine….) then here’s your results.

Lets start with the obvious first shall we? “Double White Line” and “Three Steps Closer” are both from a session recorded with the legendary Kim Fowley, and mark the last songs he ever produced, and his vision for the band was clear.

That guitar, straight out of 1964, and on closer in particular, there’s all the sweet harmonies of The Hollies.

Most of the other seven are taken from the first two Muck And The Mires releases and they are infused with a little more garage rock. “This Town Makes Me Feel So Lonely”, with its wonderful guitar line is utterly infectious, while “Next Door To Me” underlines my long held principle that any song with handclaps in is better than one without.

It’s the simplicity of these that gets you. Evan “Muck” Shore, has a gift for making the simple sound perfect. “Slipping Away” harnesses teenage kicks, but in an innocent way. This is rock n roll from a bygone age.

Most of them deal with matters of the heart – but then didn’t this type of rock n roll always do that? – but even on the slower “Lesley”, when there’s a touch of longing in the guitars, there’s still a bit of a glint in the eye that suggests there’s plenty more fish in the sea.

Best of the lot, probably, is “One Way To Know”. More soul infused perhaps than the others, it has the energy, the melody, the inherent cool, but moreover the suggestion that this is a band that is simply playing what they love.

That feeling carries on to the garage punk party of “It Takes Time”. “It takes time to fall in love,” sings Muck, “and I know ‘cos time is the one thing I’ve got plenty of”.

We all have, right now. And assuming you aren’t going to find the love of your life sitting in your house, and if you’re like me and you’d pretty much do anything to avoid a Zoom quiz, then get your “Quarantine Kicks” here instead.