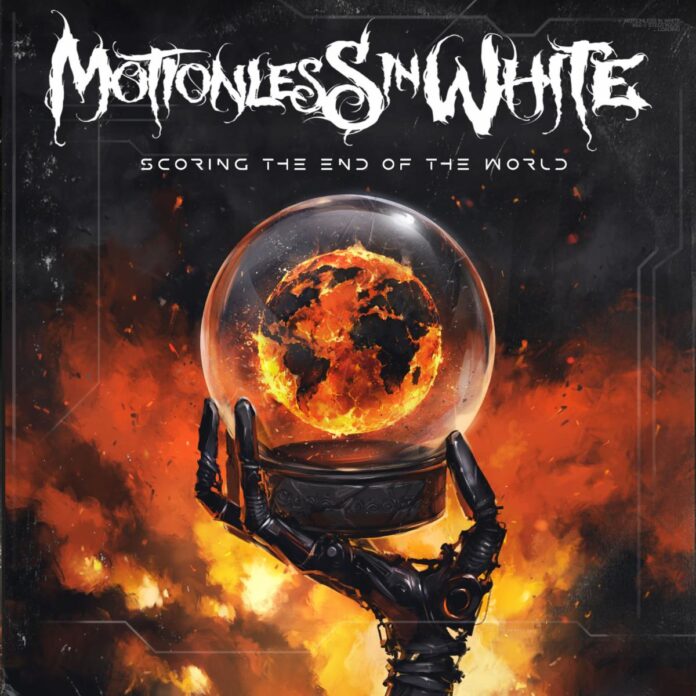 As you get older, there’s a tendency to think the past is actually closer than it is.

I was going to write in this review that Motionless In White are just about the only modern metal band that I have any time for. Except, they’ve been releasing records for 12 years.

Yet, there is a grain of truth in that. Metal of any type of recent vintage is a bit of a blur to me after Slipknot to be honest, but there’s something in any genre. There’s that one band who transcends your norm.

That band – in metal since 2010’s – is this bunch of reprobates from Scranton, PA.. “Scoring The End Of The World” is astonishingly ambitious.

I reviewed their 2019 record “Disguise” (a turn of events that surprised me) with something of a sense of bewilderment. It was, I wrote at the time “…..ace. Angry, bleak, nihilistic, ferociously heavy, cathartic, and moreover brilliantly done.”

Of course that was 2019. That was before pandemics. Before the world went mad. Before we started shipping refugees to Rwanda like some fascist state, and before the US started outlawing abortion. Christ, if MiW were angry last time, this time they’ve every right to be furious. They are.

The opener “Meltdown” is sensational. Industrial. Thrash. Some Prodigy type vibes. They are all here. Together with a laser guided anger. “On tonight’s series finale” intones the female voice, “we’re all going to fucking die”.

Doomsday at our fingertips indeed.

Elsewhere, you have to marvel at the way this band uses synth. It makes songs like “Sign Of Life” totally different to what they might have been, and “Werewolf” gets bonus points for two things: first it sounds like those Stabbing Westward albums I loved in the 90s, and second, I think I am one of the few people listening to this old enough to get the “somebody’s watching me” reference.

“Porcelain” is raw and fragile all at once, and you know you’re out of your comfort zone when the special guests are unknown to you. Bryan Garris of Knocked Loose, kudos to you for the sloganeering of “you fucking fascist, you fucking pig,” mind you.

“Masterpiece” is the centre-point it seems. A therapy session over three and half minutes, and for all the gentle opening of “Cause Of Death”, its brutal. The heaviest song that I’ll review this year, the new lyrics feature on Spotify came in handy, that’s for sure.

Yet, as on the last one, “…World” for all its genuine ferocity, still lives on hooks and choruses, just like the bands of the 80s I grew up with did. It’s just “We Become The Night” (which has a bit of Marilyn Manson about it) and the likes, seem to be a soundtrack to some nightmarish film playing in the heads of the band.

“Burned At Both Ends II” (the first one was on their debut) is a maelstrom, and “BFBGT: Corpse Nation” could (in another parallel universe), be an Alice Cooper tune. Assuming Coop went “nu metal”.

“Cyberhex” – the first single – was “a love letter to the fans” as Chris Motionless put it, it is a proper stomping thing, mind. Written about the last two years, it’s scope is the reason I and millions of others are Motionless in White fans, surely. It’s enormous.

Caleb Shomo (who I have heard of!) joins for “Red White, Boom!” which has a bit of those Rob Zombie remix records going on, and basically thinks that if America is a powderkeg then they’ll fetch the match.

Not for nothing does the last one (the title track) feature Mick Gordon, a composer who does computer games, in honesty “Scoring The End Of The World” feels like a shoot ‘em up throughout.

The world in 2022 is confusing, bewildering, a melting pot of all kinds of things I don’t understand. On that basis, this is its perfect soundtrack.

Previous article
BAND OF THE DAY: SECOND CITIES
Next article
BASTETTE UP FOR A GOOD TIME