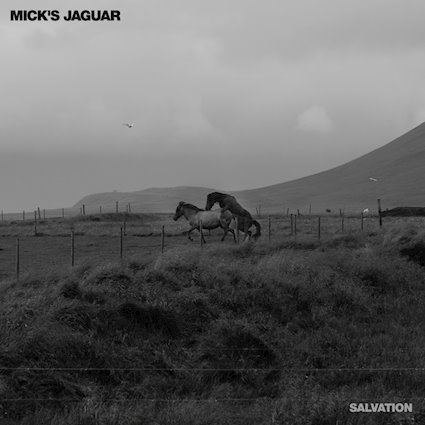 When it comes to Mick’s Jaguar, no one has a clue. They’re giving us all the run-around.

Back in 2018 I reviewed their debut record. “Fame And Fortune” and my opening line was this: “If I told you there was a band that was equal parts AC/DC, The Stones, Thin Lizzy and New York Dolls……”

Classic Rock magazine had a go too: ““If Ace Frehley was in Thin Lizzy and it was the summer of 1977… and they were all really into the Sex Pistols and AC/DC…”

Oh and they’d originally formed as a Stones covers band (hence the name).

Now, you know we like to let daylight in upon magic around here and don’t do formulaic, so let me tell you, Dearest Reader, why journalists reach for comparisons like those (or why I start reviews with intros like this). Ready: because the band isn’t playing by neat rules, that’s why. We like it when you know what’s coming next.

And for half an hour that’s what they do.

“Skin Contact” manages to sound filthy, punk and primal all at once. The lead breaks ooze sleaze from every pore, and singer (they list him as “vocalist” and not “singer” on the stuff they sent, makes sense) seems to want to fight you. A thought he makes clear on “Handshake Deals”, spitting the idea that he wants you to “taste the skin on the back of my fist”.

At its most basic, this is loud, proud and with a whiff of violence, but as single “Man Down” underlines, these five know how to write a hook when they choose.

Their original bassist never returned from the Thailand jungle so they roped in old friends Jack Ridley (Drowners) and Aaron Roche (Wye Oak, Anhoni, Tōth) to help. The result is a gang like sound, but over something that’s not far off arena rock (“Free On The Street” has that vibe). If they’d wanted to go down that route, then fine and dandy – and indeed “Molotov Children” could just about pass for AC/DC – but the thing about not playing by the rules? It means you can do anything you like, mate.

In practice, this means your record can cheerfully have a punk rock boogie on “Speed Dealer” and a fuzzed up homage to being drunk on “Nothing To Lose”, before unleashing the type of groove that Judas Priest might have had a go at on “British Steel” and calling it “5am”.

Thank whatever god you believe in that there’s no ballads here (we’ll go with Lemmy, seems as good as any). The closest it gets is a menacing, slow burner called “Hell’s Gate”. It lurks, waiting to attack, and goes on about “jail cell walls” like it knows things, before just for banter, Grace Hollaender sings that one, changing the dynamic, “I am higher than a Georgia pine” she offers. Cool. I am not arguing, nothing to do with me.

Mick’s Jaguar simply understand sex, drugs and rock n roll better than me. And if they don’t, they sound like they do, so either way….

We are mere conduits for the sound at this point, oh and I am aware that the cover appears to be two horses shagging, I just wasn’t sure how to broach the subject. One of them might be Shergar?

“Salvation” is the sound of the underground, its nasty, its gnarly and its raw. The best things normally are. Just don’t let anyone tell you they understand it, they’d be lying.