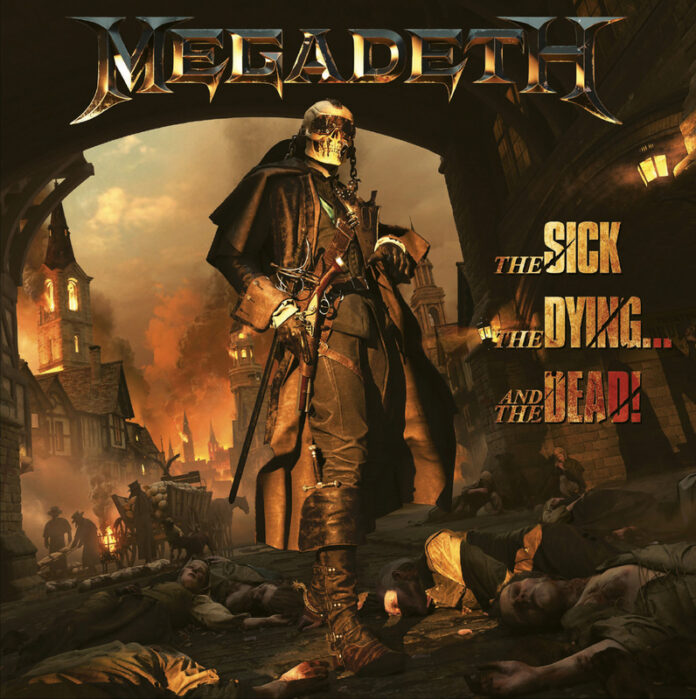 When “The Sick, The Dying….And The Dead!” Was announced back in the summer there was a lot of talk about how “long time” fans would enjoy it. “Old school” Megadeth was another phrase knocking around.

On one hand, cool. Lord knows there’s so little decent new thrash around and with the old guard not releasing anything decent in a long time, someone has to step up to fill the void, right?  Then there’s the other part of you that goes, come on Dave. Don’t put them hi-tops on mate, it’s not 1984.

Mustaine himself said something on the press stuff back then: “For the first time in a long time, everything that we needed on this record is right in its place. I can’t wait for the public to get hold of this!” was his take on it, and whilst on one hand you can dismiss that with a “well he’d hardly say it was crap, would he?” the choice of phrase is interesting. Get the record “right”.

Listening to it now, you can say that he’s done that. And done it perfectly. It’s a thrash record, sort of. But it’s the perfect tone for a Megadeth album to have in 2022.

Cards on the table. I am that “long time fan”. I believe firmly that Megadeth are the best thrash band, along with Testament and Exodus. So if he’s looking to impress me, Mustaine has done that. The opening title track is a cracker. That trademark sneer over a song about the Black Death and the solo’s! That’s the thing with Megadeth. It was always about the leads.

“Life In Hell” does the moshpit thing. It also rhymes “busted” with “trusted” with not a hint of irony, but we’ll let that go, given the seriousness of the words. Indeed, this is a serious record in every way and any humour in it is from the gallows, but then 2022 hasn’t been a lot of giggles, has it?

“Night Stalkers” slashes and Ice-T’s turn is a belter. When he explains that the “game’s over, bitches” you’d best believe it’s over. There are some really special, original tunes here. Things that no one else would have thought of. Work like “Dogs Of Chernobyl” with all its prog overtones falls into that category. “Sacrifice” too, is straight from history. Words more like Iron Maiden, perhaps, but with a real contemporary thrash flavour. For that you have to credit co-Producer Chris Rakestraw. Famed for his work with Parkway Drive and Danzig, he’s helped this vintage of Megadeth find something new.

“Junkie” is typical of the darkness that abounds. Written from personal experience, you’d imagine, it is a powerful piece, as is “Killing Time”. One of the more catchy and hook filled here, whoever it’s about needs to worry. Then you clock the second verse:

It’s just a matter of time, you’ll screw the world inside out

You’re a sick psychopath, you squander everything and then laugh

It’s brilliantly clever. It really is.

This is a lengthy record. 14 songs and over an hour. “Soldier On!” casts them as fighting for metal, or the band, or their futures, “Celebutante” sets its sights on the people with no talent that are desperate for fame, and “Mission To Mars” – which features the quite stupendous couplet of “Open a window for the seven sisters of Pleiades. “Hello ladies”, “Hello moon man”” – is a slow building rocker. In a way all three prove the skill of this album. No letting up in the “deep cuts” here for sure.

But, actually, if you want to look at Megadeth in 2022, then the last trio of tunes is your go to. “We’ll Be Back” is the old school band. The original line up could have done this and I could be the 14 year old kid who thought “No More Mr. Nice Guy” was an original of theirs when I bought the single.

They follow this up quite stunningly with Dead Kennedy’s “Police Truck” – which would be funny if it still wasn’t as prescient almost 45 years after it was written – and then a hard rocker to complete things, “This Planet’s On Fire (Burn In Hell)” even has Sammy Hagar on vocals, doing it like only he can.

So yeah, this is thrash. But its more. And its not fussed about what was “supposed” to happen or not. So did they get it “right”, unequivocally yes. “The Sick, The Dying….And The Dead!” is the best Megadeth album in years.