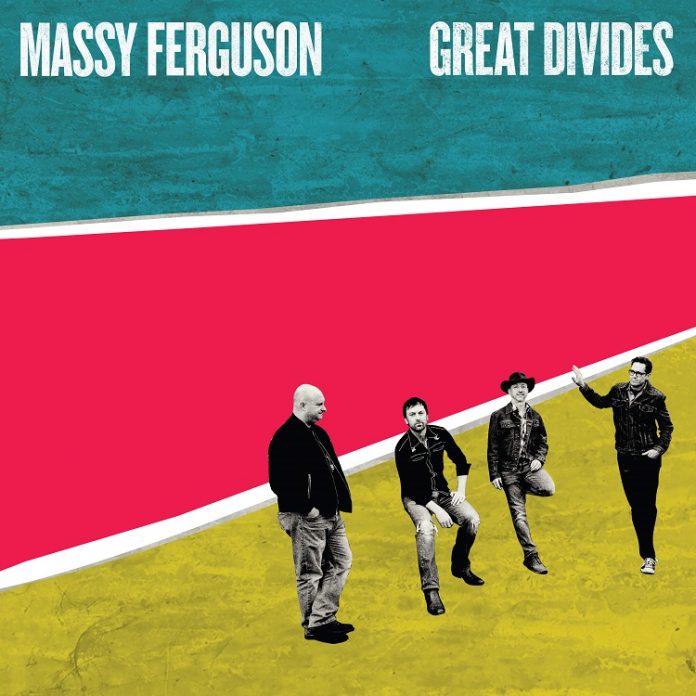 On his recent “…On Broadway” record Bruce Springsteen made an interesting point. “All my songs,” he said, “were about escaping my hometown. I currently live 10 minutes from where I was born….”

Rock n roll, mostly is about escape when you think about it. Whether it’s the escapism of the hair metal bands of the 80s, or the more blue-collar tales of the singer songwriters, the characters generally want something else.

Massy Ferguson, on “Great Divides”, also deal with a journey. Theirs starts in small town Seattle,  and with ends an adult dispensing words to his sons. The circle of life, is all here across the 10 brilliant songs that make up the bands sixth records.

The best way to describe this, because they were the band I kept coming back too when listening to this, is if The Drive By Truckers had been from the Pacific North West instead of Muscle Shoals, then they’d sound like this too.

“….Divides”, as if it wants to get straight to business, doesn’t mess with preamble. It is straight into “Can’t Remember” which recounts the then young singer Ethan Anderson talking to the woman who was to become his wife. Coming on like a more roots orientated Hold Steady – they aren’t your conventional Americana band because the solo from Adam Monda absolutely screeches and the piano work from Fred Slater is straight out of the barroom – it sets the bar, and sets it high.

“Drop An Atom Bomb On Me” is another that melds its way on the back of a deceptively catchy hook, and is heavier than many. More Augustines than country, it is the work of men who cut their teeth in rock bands.

Seattle soul singer Adra Boo plays a winning hand on the fabulous “Maybe The Gods”, which adds yet more colours to this pallet, while “Rerun” – like many of them in truth – barely hides its dark heart, despite an uplifting chorus.

“Saying You Were There”, is a change of pace, but is brilliantly bleak, while “Don’t Give Up On Your Friends” has the pleasing fuzziness of “Murmur” era REM perhaps, but comes with a side order of superb slide guitar.

Best of all, though, is the utterly glorious “Mommas In The Backseat”. A narrated story – and I know I’ve mentioned DBT already in this, but I am going to again – of teenage indiscretion gone wrong. “I told her about the fight,” says Anderson, “but what I wanted to do was wrap myself in that old Star Wars blanket, and go to sleep. But I didn’t say that at the time”. Even if you didn’t have a Star Wars blanket, then you’ll understand the sentiment.

“Saddest Man” is built around a metronomic drum beat from Dave Goedde, and is the most country flavoured of the work here. “Wolf Moon” is balladic and melancholy, and starkly different to the others in its message.

“They Want That Sound” is more typical of what has gone before and there are few bands who do things this well.

It’s almost a cliché to say it, but here it is absolutely true. From the bar to the dirt roads of the heartland, to thousands of miles away across the ocean and another continent, there is something here for everyone. These tales might have been born in the American Northwest, but they will find a home everywhere.