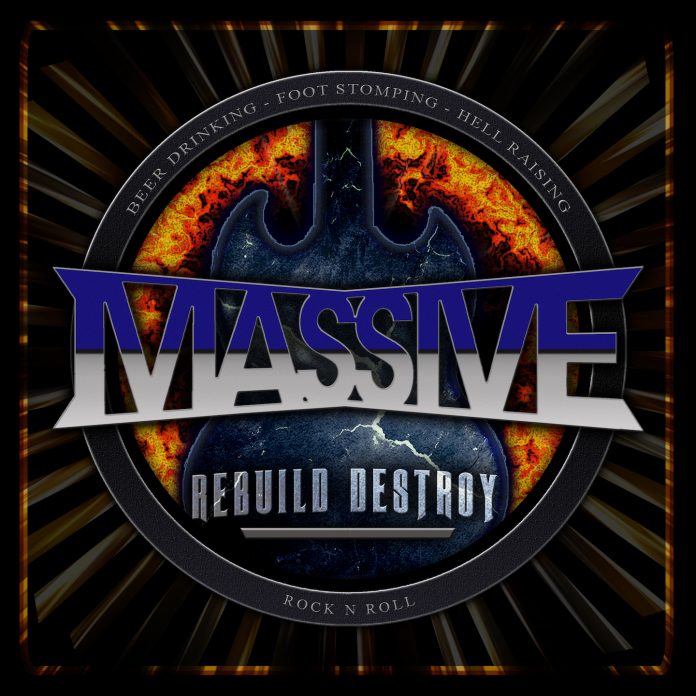 I am instinctively, always drawn to the latter.

A few years ago, I got the first Massive album as a freebie with an edition of Classic Rock (I think?) and went to watch them one Thursday night in a pretty horrible venue – if I tell you it was a converted Woolworth’s store that might give you some idea – and the crowd was somewhere beyond sparse.

That evening, the bands singer, Brad Marr, suggested this: ““You know what’s cool about playing to twenty people? Not a lot”. It was, however, what he said after that which endeared him to me: “But you’ve all come out tonight, so we are going to rock out like it’s Wembley Stadium.” And, damn it, if that’s what they did.

And it’s what they’ve done every time I’ve ever seen them since, too.

Third album “Rebuild Destroy” continues the upward curve of their previous collection, “Destination Somewhere” and in so doing is the record you always believed they had in them.

Seeing them in the autumn, the show was probably the best they had done. And now, the confidence they clearly had coursing through their veins that night was very obviously well founded.

“Generation Riot” opens things up as if it has serious work to do – and little time to do it. “Long Time Coming” is southern rock played by a biker gang, but if you knew they’d got that in sound, then there are plenty of differences here.

Not least “What You Gonna Do” which actually recalls Guns N Roses at their most cocksure. The sort of thing that would pull a knife out at a gunfight, it is as angry as Massive (who appear to be the nicest blokes on the planet) have ever got.

There is little doubt that having Ben Laguda back in the group – like Marr he is a founder member – has helped, because work like “Bullet” has the same energy as the debut, but the songwriting, the playing, just everything about it, is better.

“Roses” has a crunch, but a melody and a sing along quality, that will sound fantastic live, while this new-found maturity (this is not a dirty word) has seen them able to include stuff like “Face In The Crowd” which has a 60s, almost psych quality to it.

They do recognise, though, the need to let your hair down and crack open a beer or two. “Over And Out” is something not too far from Rose Tattoo’s ballpark, while Airbourne would be proud of the catchy “Pieces”.

What they have managed to do on “Rebuild Destroy” is add a menace. “The Wrecking Crew” isn’t too dissimilar from “Lacey”, say, on their debut, but it lurks in shadows with a brooding bassline before it explodes, and although “Gettin’ Heavy” is a simple bluesy boogie, then it is one that probably needs the Hells Angels to be the security on the door.

The band have been through a lot in the seven years they’ve been going and not all of it good. All that emotion spills out on “Walk A Mile In My Shoes” the fabulous closing ballad that soars its way to a finish, but if anything showed their talent, then its this.

It’s hard rock, it is good time fun – mostly – and they’re (mostly) Australians, so cue lazy comparisons. The fact is, though, as much as all great hard rock should have an element of Acca Dacca in it, “Rebuild Destroy” is the sound of a band that wants to make their own statement. Of a band that wants to build something – if only so they can smash it.