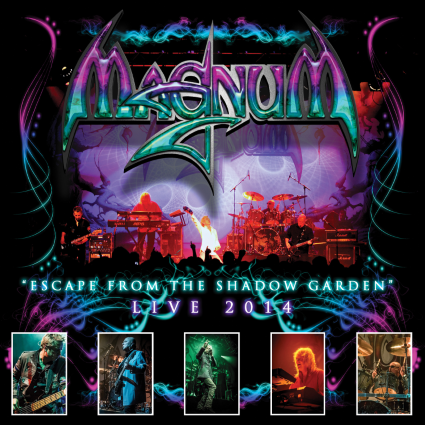 The live album.
Let’s just leave those words hanging in the air for a minute shall we?

It used to be the way for bands to make a career. “Alive II” put Kiss over the top, “Frampton Comes Alive” sold by the million, “Live After Death” captured all the excitement of the world’s greatest band touring the world as a huge concern for the first time, and perhaps the best of all the genre “Live And Dangerous.” You can argue all day about how much of it was done in the studio, but that collection adds to the thought that Thin Lizzy might be gods.

All those albums, though, have one thing in common: they are 30 years – at least – old. Of a more recent vintage you could say, perhaps, that Nirvana’s “Unplugged In New York” deserves its place in that pantheon, but not many more do.

No matter, however, as Magnum decide it’s time for the live record to happen too. Actually, there’s more merit to this than you might first guess, because their recent studio output, as well as their seemingly never ending tours, has convinced a new generation of rock fans that Tony Clarkin, Bob Catley and the chaps are one of the finest bands this country has ever produced and still has to cherish.

Last year’s wonderful “Escape From The Shadow Garden” proved this in spades, and merely just carried on the good work of 2012’s “On The 13th Day.” The accompanying tour was a thing of beauty as they ran through a setlist that was just the right mix of old and new.

It’s that show that is captured here. 12 of its tracks, recorded all around Europe. And that’s about all you need to know. This – right from the opening  “Live Till You Die” to “Kingdom Of Madness” which brings the curtain down – is a showcase from the masters of melodic rock. Any other band that hasn’t got songs as good as “How Far Jerusalem,” “All England’s Eyes” and “Vigilante Man” need not apply. Magnum have beat you to it.

That trio are from the bands classic back catalogue, but their rich modern creative vein isn’t forgotten here, as “Dance Of The Black Tattoo” proves pretty conclusively.

It all adds up to a fine collection, and one which would make a decent starting point for anyone who  was looking to investigate this most wonderful – and quintessentially British bands for the first time.