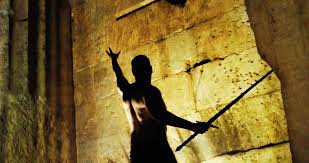 Macabre Omen are an established part of the darker side of Greek music. They formed in 1994 in Rhodes but took eleven years to release their debut album. The Ancient Returns received a positive response from critics and fans. It has taken a decade again to release the follow-up Gods of War – At War. So is it worth waiting a decade for?

In the build up to the album’s release the long gap was unrepentantly explained by vocalist/guitarist Alexandros “The band is not a business so we always go at our own pace. A release is due only when the omens are right. Even if it takes a decade.” On listening to this album you have to agree with him.

“I See, the Sea” kicks things off with a nautical air of muscular menace and shades of Bathory cover the creaking wooden boards that drift in the ocean ensuring the vessel stays afloat long enough to regale to us the murderous tales of the sea. Viking-sized melodic riffs pulsate through the track, and the album as a whole, in a ferocious fashion, cutting down anything in it’s way.

The title-track picks up the torch from the dying hand of the opener and thrusts onwards with the same zeal and murderous appetite. Vocally the album sways between dark black metal notes, although low in the mix, and more powerful and raw but cleaner vocals. It’s a balancing act that has been pulled off very neatly.

By the third track the fire and thunder is replaced, albeit temporarily, by a delicate, almost uplifting, opening strains of “Man of 300 voices”. The acoustic guitars and woodland sounds induce an atmosphere of relative peace and calm. That however lasts for less than three minutes before the roar is brought out of the dark and back into the light and from that point there is no retreat.

“From Son To Father” provides the most introspective and torturous moments on the album and appearing as it does just over halfway through the eight tracks gives us a great point at which to prepare ourselves for the battle ahead. Screams punch through the track as a hymn to death and fatherhood unfolds.

The production on the album perfectly realises the bands vision as to is the use of multiple instruments to achieve their sound. The epic and expansive soundscapes and dramatic atmosphere produce from instruments such as the Mouth Harp and Timpani enhance the music and pushes their sound to even greater depths.

Overall, this is an epically stunning album, on course for one of the best of 2015. If it takes them another ten years to produce a work of this magnitude and confidence then who are we to argue. One thing you can be sure of is that we will eagerly wait whatever comes next , but for now, this is as good as it gets.