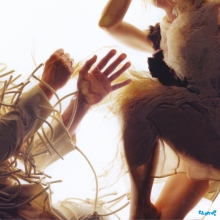 LUMP are the product of London folk singer-songwriter Laura Marling and Mike Lindsay the co-founder, composer, and producer of UK acid folk band Tunng. They have a new album `Animal` out this month which follows up their self-titled 2018 debut. The songs that the duo create as LUMP are unlike anything from either of their respective other projects. The lyrics from singer Marling draw heavily on her interest in psychoanalysis, while Lindsay primarily constructed songs around his Eventide H949 Harmonizer, the same pitch-shifter David Bowie used on ‘Low.’

‘Animal’ was recorded at Lindsay’s home studio in Margate, Kent.

The album opens with `Bloom At Night` which has a quite hypnotic repetitive rolling piano key sound that continues throughout this number. A quite mesmerising track where the vocals seem to ebb and flow about and atop of this platform of sound. There`s a more belligerent texture to `Gamma Ray` where the singers vocals are possibly double tracked and give the impression that they are answering each other back. There were some odd vocal sounds that seemed to be despatched via the synth harmonizer.

Title track `Animal` has a strange sort of captivating electronic beat while the lyrics are despatched quite dispassionately initially but seem to gather a more emotive texture as the number progresses. It almost halts midway with some peculiar screams and sounds before resuming a more harmonious vibe. We have a heavier background beat to `Climb Every Wall` with vocals that moves this composition along in an appealing manner. The chorus line is delivered in an off kilter chant like manner which will maybe appeal to me the more I play it.

`Red Snakes` is a slow burn, almost a ballad which is principally piano and vocals but does have a rolling drum sound at times throughout. There`s a slightly unnerving remote sense to the vocal delivery at the start of `Paradise` before the musical accompaniment joins and it becomes more accepting and less unsettling. It takes a sort of curve ball in the latter part with synth and multi tracked vocals competing for attention.

`Hair On The Pillow` is a quite serene instrumental with what sounds like a glockenspiel but is probably synthesised. There`s a more upbeat pop like number with `We Cannot Resist` a track written about hedonism with whispered vocals at times throughout and a chorus of “kids on the run” that begs to be sung along to. Towards the end the title of “we cannot resist” is shared in a manner akin to the gospel protest song “we shall overcome”. A real earworm and totally infectious.

`Oberon` is a stripped back submission with piano and synth laying a base for the delightful vocals to freely express themselves above with some enchanting inflections. The album closes out with `Phantom Limb` which has vocals that are shared in a quite uncomplicated manner over a quite surreal musical backdrop, not quite experimental but certainly heading there. The latter part has an odd echoey spoken word account of those involved in the album`s formation.

To me Laura Marling is folk singer songwriter royalty and Mike Lindsay a musical maverick and their coming together to collaborate on `Animal` has fashioned a fascinating and at times a compelling and absorbing listen. There are some instantaneously catchy soundscapes, and some that take a little longer to sync and some that just maybe pass you by but nevertheless it`s a memorable and addictive listen.

Let`s hope it`s not another three years before they join forces again.