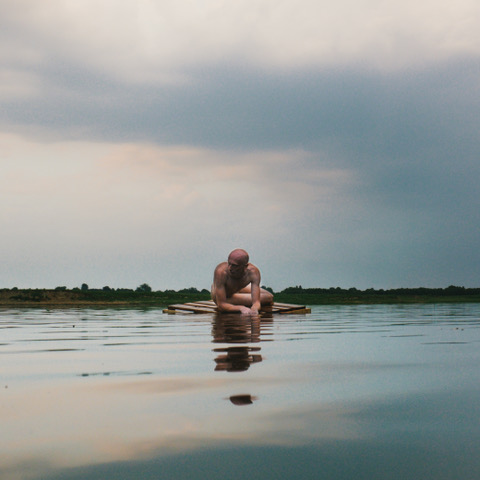 Low Island are a dance / electronic quartet formed in 2016 and led by vocalist and multi-instrumentalist Carlos Posada with Jamie Jay (backing vocals / multi-instrumentalist/ producer), Jacob Lively (electric and synth bass) and Felix Higginbottom (percussion and drums). ‘If You Could Have It All Again’, the debut album from the Oxford four-piece, takes stock of a twenties filled with false starts, heartbreak and cyclical conflict and carves a path towards a better decade to come.

The album opens with `Hey Man` with its pulsing heartbeat and distant falsetto vocal. A song that seems to be a precursor to making changes in one`s life. It`s a quite mesmerising track with some occasional drumbeats, swirling synth keys and harmonies. The song really blossoms, literally in the last few seconds. We have a forceful more in your face offering with `What do You Stand For` with its driving synths, pounding drums, distorted guitar riffs and assertive lyrics probing “who are you? And what do you stand for?” an introspective question as much as one aimed at the listener.

`Don`t Let The Light In` is a dance like upbeat number with a repetitive drum beat and driving synth that relates a tale of a relationship that both parties recognise is about to change but they just want this last time together before it does. There`s a slight reprise of the song with just a flowing vocal and acoustic guitar chords.

`In Your Arms` is a number that laments people moving on and times changing but there’s hope among the chaos and the loss. This is shared against a rhythmic backdrop of strummed acoustic guitar with a tapped drum rim and dreamy synth keys and vocals floated above and around giving it a quite pensive and hypnotic texture. There`s a really eclectic atmosphere to `Who`s Having The Greatest Time` it seems a mix match of ideas and thoughts with vocals leading to a really intriguing composition that`s a little difficult to explain but fascinating to listen to.

`Feel Young Again` is a track that talks about recognising the part of you that’s holding you back, a sort of fear of change or moving on. It seems to be a cathartic dance track that relates the lyric of “I will set you free” as a sort of self-help aid or instruction to those that are struggling. We have a mid-paced poignant electronic offering with `I Do it For You` which is a possibly a confessional as to the narrator`s previous behaviour.

`Momentary` is a kind of melancholic love song of sorts, a stripped back pledge of love against a background of synth bleeps and quietly shared vocals that took a burst of speed in the last minute. The lyrics throughout `Spaces Closing In` were delivered at a rapid tempo, seemingly relating reasons the raconteur undertook or didn`t some misdemeanour and the reasons why.

The album closes out with the ‘What The Hell (Are You Gonna Do Now?’), a ruminative composition that evaluates where life has left you at a certain age and the decisions you now have to make. A submission that`s set against a raw musical background with lyrics presenting all the emotions you`d expect from this lifestyle intersection.

‘If You Could Have It All Again’ is about reaching a sort of crossroads in life and reflecting on the past decade from the view of an imaginary character, the good, the bad and possibly the stupid things. What would we have changed or done better is seemingly irrelevant and it`s time to learn from past mistakes and move forward as its where we go next that is critical.