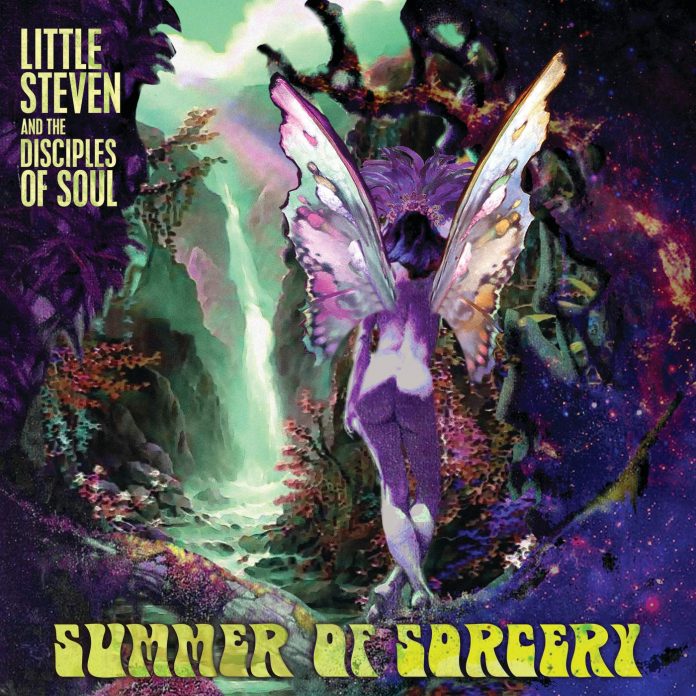 It is striking that some of what I guess you have to call the “Old guard” of rock n roll retain a certain coolness, a cache, that others don’t.

Steven Van Zandt most definitely does. At least once a week I get a press release from some band or other that is absolutely desperate to tell you that they’ve been selected as one of “The Coolest Songs In The World” – an accolade that SVZ gives out on his radio show. And why? Because he matters.  He counts. He’s one of the greatest.

A disclaimer here might be in order. Amongst the many things he does, is co-own a record label, “Wicked Cool” and they recently released the new Ryan Hamilton record. One afternoon I was at work and my Twitter notifications started going crazy. And all because Little Steven had tweeted my review of the album. For someone like me, with a website like mine, done entirely as a hobby, that is as big as it gets.

So, yeah, I get it. I get why these groups are desperate for Stevie’s approval, and it feels good.

Which brings us to the “Summer Of Sorcery” record. Last year he stuck one out called “Soulfire” which featured largely songs he’d written for other people, this is a full-on Disciples Of Soul collection, if you will.

And it is astonishingly good, it really is.

It also shows that just like us, SVZ has his heroes too. On “Love Again” – an absolutely glorious Southside Johnny style Jersey shore romp – he offers this: “I’ve got a picture of Brian Wilson I pray to every night” and maybe that feel, that love of rock n roll in its purest form never left him?

That one is the third cut on this. On the opener, “Communion” which essentially distils all that is wonderful about rock n roll into five minutes, he pleads “baby, baby put the camera down, turn off the phone if you know how” and the inference is clear. This is music. Don’t overthink it. Live in the moment. Enjoy it.

That maybe is exemplified by the bit before the solo where he implores the band: “somebody take it to the bridge….” As if he doesn’t know which Disciple Of Soul is going to, or indeed doesn’t care. As as long they do.

There is something brilliantly off the cuff here throughout. “Party Mambo” is shot through with both the Latin rhythms and the activism that has shaped his life: “They abandoned Puerto Rico in their hour of greatest need” and the uplifting sound can’t hide the message here of the destruction caused by the 2017 hurricane.

It is genuinely staggering how much is in this hour. “Vortex” with its slap bass sounds like a funky opening to a US Cop show from the 1970s, and “A World Of Our Own” is somewhere between the classic Phil Spector production and Elvis Costello’s lip curl.

“Gravity” begins in rather ominous fashion, and the lyrics are a clear metaphor for the state of not just Van Zandt’s homeland but the world in general. But as if to balance this out, “Soul Power Twist” offers the wonderful thought that music could bring us all together. The sound is the one that popular culture has always suggested to me that 1950s America was like – maybe in a romanticised way it was? Whatever the “hip hop chicks and a policeman or two” are all joining together here and dancing the night away.

Best of all, though – and actually, it might well be the best song anyone records this year – is “Superfly Terraplane”. Those bands that vie to be the “coolest song in the world” are mostly power pop or punky. They should all listen to this and take notes. It’s got the energy of Chuck Berry’s “Promised Land” for one thing, and it is written from the perspective of the youth who have had the future ruined: “Hey Mr. Baby Boomer,” he spits at one point: “answer me one thing before I fly, which one of you assholes blew a hole in the sky?!”

“Education” is seasoned from the east, and its menace is palpable. As its desire to change the world. “Suddenly You” is as trippy as you like, “the naked and wasted come to play” and if you like that sort of thing dive right in, those of us that are too scared to be either will pay “A Visit To The Blues” instead, and its 12 bar shuffle is just perfect.

It ends with the title track. And it’s an epic. The first line: “I wanna get lost in your festival of possibilities” is a signpost to the fact that anything goes here, and this explores. The whole thing has been a journey, this is just the thrilling conclusion.

“Summer Of Sorcery” should be the soundtrack to whatever you do in the next few months. It’s that good. But did you ever doubt that?