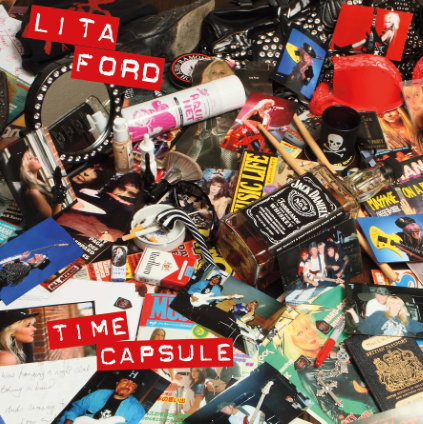 John gets to… urmmmm grips with the new Lita Ford

The Queen of Rock and former Runaway Lita Ford releases a compilation of unreleased material recorded in the late 80’s (with a little help from her friends) from the vaults.

When I was asked to review this album, my first thoughts were: “Wow – Lita Ford!” – you see, as a 15, 16, 17 year old kid growing up in a working class environment in Birmingham, England, I had posters all over my room (mostly ripped out of Kerrang! Magazines), but I also had a huge life-sized poster of Lita on my bedroom door (you know the one, where she’s bending over an acoustic guitar and with her butt-cheeks on show in black tights).  She was a Goddess to any kid of that era who, like me, was into his rock and metal.  It was her or Madonna, and Lita always won!

Flash forward 25 years and I’m listening to this album and remembering those days with fondness.  You see, it’s not necessarily the songs, the musicianship or the musical style.  It’s what she represented – along with the likes of Doro Pesch – that ultimately, women have this hold over men that will have you literally eating out of their hands.  This album is a timely reminder that I once had a youth, that I grew up with rock music as my soundtrack and it helped me through all kinds of shit going on in my life.

Anyway, enough about my life – I’ve got an album to review!  In terms of song selection, Lita has done a fine job picking out songs that are to each their own, both musically and lyrically.  There are a couple of tracks that could have been left off – the opening “Intro” is utterly pointless, in an attempt to set the scene of Lita’s father (played by ex-W.A.S.P. Chris Holmes) calling to her as she takes off in his car (a Ford!) but it really does nothing for the album.  Equally, the instrumental cover of Hendrix’s “Little Wing” is just as disappointing.  Aside from those, the other nine tracks on offer are pleasantly played and sung, with various moments of tongue-in-cheek-ness from Lita, particularly the song “Rotten to the Core” which features Kiss’ Gene Simmons on bass guitar, and his former band mate Bruce Kulick on lead guitar.  Each song is a reminder that Lita is a fine singer and also a very capable guitar player, the instrumental “On the Fast Track” gives a flavour of Lita’s riffing abilities and bluesy guitar solos.

Other guest appearances from Billy Sheehan (Mr. Big), Robin Zander and Rick Nielson (Cheap Trick) and Dave Navarro amongst others – the album overall is very listenable, and does what it says on the tin… open the capsule and discover something unheard from 30 years ago!