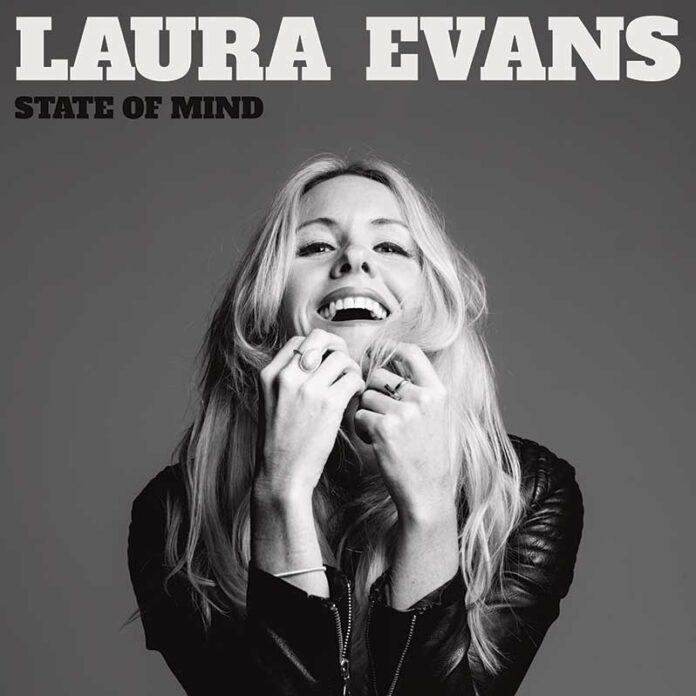 I am, in honesty, not great at noticing record covers, but you cannot miss the happiness on “State Of Mind”.

You cannot escape the joy that shines when Evans is onstage, either. Anyone who saw her recently with Robert Jon And The Wreck would attest to it. There was a warmth.

It’s been a couple of years since the “Running Back To You” EP, but in the interim it seems like rather than looking for approval, Laura has instead decided to do it her own way.

“I’m Alright” is sassy as the blues gets. “I got a broken heart, but no one would know”, she sings (make that drawls, I guess) and the middle finger is duly given to whatever fella broke her heart (she’d explained at that gig back in the spring that these songs were from a place of truth).

“Solo” likewise has that spirit. That independence, and if it has a bit of a feel of Kris Barras then that’s because Josiah J Manning – his long time producer and guitarist is playing the thing and produced here too.

“Fire With Fire” completes the hat-trick, if you will, as it does a break up song, or the aftermath anyway, but seems so intent on not letting it get to her that its almost anthemic.

What is particularly interesting about “….Mind” is that if Evans’ incredible voice was equally adept at acoustic stuff live, then on record, fleshed out there’s so much to find. “Fool” is just her and a guitar, but there’s a timeless thing going on. Sun dappled, relaxed. Yet, the title track is as different again. Really strident stuff. In a bygone age then I’d contend that it’d be the theme to Thelma And Louise.

By and large though,  this could just as easily have come from Laurel Canyon as the Valleys (it might have been recorded in Cornwall but its heart is in the green, green grass of home, as it were) “Let You Down Easy” is the type of song I want to be playing next time I am dumped, and you can picture some Nashville star singing over its country flavours.

“Drag Me Back In” – which was on the EP and was a bit of an outlier – is less of a surprise here, but its lyrics are unrepentant, for sure. You can read “strap me down and fill me with sin” however you like, me? I’ll blush and move on.

There’s been a Fleetwood Mac vibe to a lot of these (there’s a comparison with Stevie Nicks that is inescapable) but “Good At Getting Over You” is the one which brings it to the forefront, and there’s an 1980s feel to the piano ballad of “Mess Of Me”. It’s typical of what Evans and Manning do on this record, though that “Gone” changes things altogether. Hell hath no fury, and all that.

“Free” ends things on a more gentle note. It almost seems to float in on a warm breeze. “Don’t let anyone change your mind, be your truth on your own time” goes its chorus and you come back again to the cover. The smile. It comes from an inner peace, surely. From spending years honing your craft, and then pouring everything you’ve got into something that defines who you are.

Laura Evans had lofty aims for “State Of Mind” – and pulled them off.