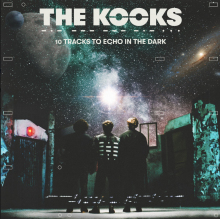 Indie post-punk rockers The Kooks have a new studio album `10 Tracks To Echo In The Dark`, their sixth, out this month. It was recorded in Berlin and stemmed from a period of work, inspiration, and creativity in the city. Singer Luke Pritchard says: “I was really affected by Brexit and I wanted to make a bit of a statement by creating a European record”. The singer also took inspiration from classic sci-fi (Philip K. Dick, Azimov) as well as surrealist works like Boris Vian and the album`s lyrics are littered with themes of hope, change and optimism for the future.

The album opens with `Connection` a number that rolls along with a chugging beat with lyrics that seem to be about somebody catching your eye and trying to make that interaction or link with them.

There`s a slight rhythmic beat to `Cold Heart` a tale of getting the brush off and writing the adversary off as having been aloof or indifferent. It takes a bit of a curve ball in the latter stages, where it slows down and becomes quite reflective and has a children`s choir adding some vocal harmonies to the singer`s questioning almost pleading tones.

`Jesse James` to me was an odd choice of title but has a continual drum machine beat and off kilter guitar chords that allow Luke to relay a tale of not always trying to prove yourself and losing the ego. We have a brief guitar solo and some synth swathes towards the end of the piece. There`s a kind of dreamy almost out there feel to `Closer` which seems to relate to a relationship that is becoming stronger. There are bongos shared throughout and a guitar solo.

`Sailing On A Dream` is a little different in that it begins with a leading bass line and jangly guitars riffs and becomes a little abstract at times with what sounds like saxophone splashes and flowing synth keys blended through. There`s a bit of a ska come reggae vibe to `Beautiful World` which has Milky Chance, a German rock band comprising Antonio Greger and Sebastian Schmidt and others joining in.

`Modern Days` has a fairly funky beat and some synthesized vocals and the following track `Oasis` continues with a similar groove where the lyrics seem to acclaim the pleasure enjoyed in a stable romantic relationship.

`25`has a captivating heavy bass rhythm not quite Mark King of Level 42 but heading there and appears to be quite introspective on a relationship that has moved on as the protagonists are no longer in their mid-twenties but can still reflect on those happy times when they were. Neiked, a Swedish artist collective of singers, songwriters and record producers founded by Victor Rådström and Mikael Rabus help out on the final offering `Without A Doubt` which has strummed acoustic guitar and vocals with keys joining in on this praise for a partner who is always there for you.

`10 Tracks To Echo In The Dark` is a little different to what I’d expect from Luke Pritchard, Hugh Harris and Alexis Nunez and seems to be a more mature composition which is understandable as the songwriter Luke has married and become a father for the first time since releasing their last album.

It nay take a few listens but there`s much to enjoy on this introspective reflective outlook.