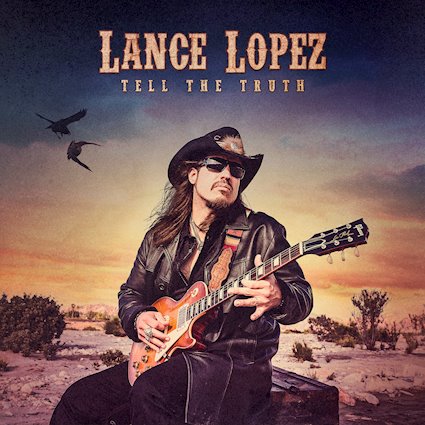 Best known, perhaps, in this country for his couple of albums as singer of Supersonic Blues Machine, Lance Lopez’s life reads exactly like that of the blues troubadour. The itinerant hired gun, if you will.  This have axe will travel, motto has brought him a lifetime of experience, a lifetime on the road and the weatherworn appearance to match.

In addition to all the greats he’s worked with the bands he’s been in, he’s found the time to release six solo records. His seventh, “Tell The Truth” is rockier, heavier and more autobiographical. Small wonder, then, there is a song here, about halfway through called “The Real Deal”. In its chorus it says: “I just wanna keep it real. Can you deal with that? You get the straight up, stone cold truth about what I really feel. I’m the real deal.”

And the vibe of the whole record is encapsulated in those sentiments. There is nothing fake here. Just 11 brilliant, heartfelt songs.

The first one “Never Came Easy” which begins in the swampy delta like some latter day Lynyrd Skynyrd song, echoes with the thought “I never got to the sugar without cutting down to the cane” as if to suggest that everything good needs a journey through something bad first, before the harmonica gives it a real blue-collar turn.

A pretty heavy – and most definitely rock – record, even when “….Truth” covers the legends, as it does on John Lee Hooker’s “Mr Lucky” it does so with a eye on the biker hangouts, while “Down To One Bar” is a modern take on classic rock n soul, but goodness me, it knows where the trouble is at: “gonna throw a couple of cold ones down” he sings and you can almost hear the wicked grin on his face.

“High Life” is equal parts the Allman Brothers and Gov’t Mule, and the organ swirls to give it a timeless feel, “Cash My Check” is perhaps the best thing here. Like some jam between the Stones and Grand Funk Railroad, it has a gleeful, devil may care attitude. One that seems to follow Lopez throughout.

This is a record with plenty of highlights, though. A country air infuses “Raise Some Hell” and maybe it is just the fact that the talkbox makes everything sound sleazy, but “Angel Eyes Of Blue” seems particularly happy with its lot in life.

“Back On The Highway” not only sums up the existence of a traveling musician, but also sounds like ZZ Top had added pianos to their Texan boogie (Lopez and Billy Gibbons are old friends). This is balanced out marvellously by the wonderful “Blue Moon Rising” which is gentler but has the dreamy feel of a summers day – as if the guitar sounds blue in on the breeze.

The title track is saved for last. If the whole album has kept it real, then this dots any remaining I’s and crosses the last T’s. Built around a funky riff, a bass groove and a whole heap of good times, it adds a handclap in the chorus to make it almost anthemic.

A brilliant guitarist, one with a voice that sounds perfect for the music he plays, Lance Lopez has been doing this so long that it might be second nature. Credit, then, that he has changed it up just a notch or two here and made something that is maybe the standout of his career.

And that, is the whole truth.