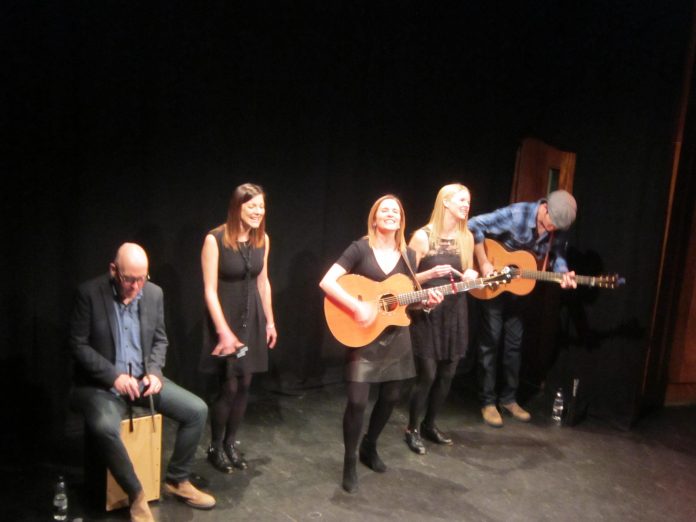 The Ennis Sisters, Maureen, Karen and Teresa, started playing music at a young age, encouraged by their father John, a traditional button accordion player and their mother Ceilie. These Irish Newfoundlanders arrived at the Midland Arts Centre, Birmingham as part of a double bill promoted as an evening of the best East Coast Canadian Folk. Sadly, the inclement British weather disrupted my travel plans and put paid to me seeing the other half of the bill. There is no fanfare as the girls file out of a door, into this room formerly used as a puppetry theatre, to greet the intimate but enthusiastic audience. Quick introductions and the ladies get straight into “We Will Sing” a wonderful song of joy and sorrow, during which the crowd are encouraged to join in and sing along.

Newfoundland is a large Island off the east coast of the North American mainland and as Karen shared, the island joined Canada in 1949. This union with Canada has done little to reduce Newfoundlanders’ self-image as a unique group and many of the indigenous people were encouraged to relocate and give up their culture of fishing and farming, This is shared as an introduction to the song “Out From St Leonards” a heart-breaking song with a real Celtic flavour. The girls explain that they are in fact, blood sisters as opposed to being Nuns as they have been confused with at one of their booked shows. Mark Murphy who is a songwriter and the band`s driver on this tour joins them on stage to sing backing vocals and play percussion in the form of a seated box, The strength of the groups song writing is that a lot of what they transcribe is observations from personal experience and with this is mind next up in the emotionally moving “Take Me Home” A tribute to their Uncle Ronnie who died from cancer in Ontario and was brought back to Newfoundland where a house party was organised to honour him. The words were inspired from a house blessing spotted on the wall of a room in the property. The band have been around for twenty years and will soon release their thirteenth album, They play a tune that will be on this recording called “Keeping Time” written as a first dance tune for Karen`s wedding. A delightful waltz style ditty, A real curve ball comes next when the group share that they have recorded a Sea Shanty version of a track written by British folk singer-songwriter and one time vocalist of post hardcore band Million Dead, Frank Turner called “Sailor`s Boots”

In October 2009, their cousin Steve took his own life and the group wrote and sung a track called “Sing Him Home” that they performed at his funeral and I must admit this tender song left me close to tears with a lump in my throat as a close relative, sadly left this life in similar circumstances. Karen tells us that they were warned about The Beast from the East weather that we are currently enjoying but thought it was fake news as they had twenty-three centimetres of snow, back home overnight, whereas everything here almost grinds to a halt. Dave Gunning joins the troupe for the last two songs and the penultimate song is a real uplifting piece called “Always See The Summer In Your Eyes” which does indeed warm the place up. A track written by Sligo native Dermot Henry, The team bow out with the infectious “Until Then” crafted by Mark Murphy and Maureen Ennis which has Karen playing a Tin Whistle before joining her sister Teresa in a charming display of Irish come Newfoundland set / tap dancing.  A wonderfully pleasurable way of closing out this cracking show. This was a richly enjoyable evening in the company of some accomplished musician / storytellers / entertainers. All I can say is get to see these ladies when they tour again as the Eurythmics and Aretha Franklin observed `These Sisters are doin` it for themselves` but should be doin` it for a much wider audience,