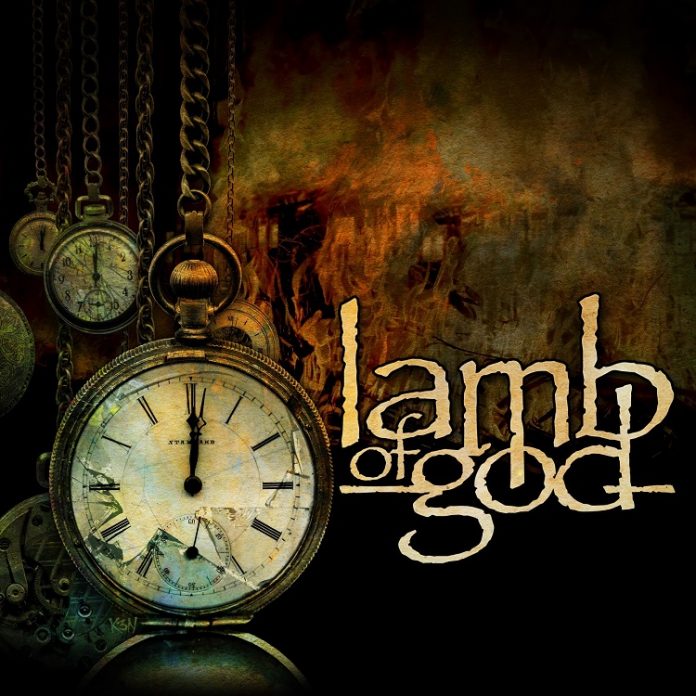 I suppose, if you are a creative type, you basically have three options in these times. You can either go for the “escapism” approach and give them something by which they can forget their troubles – the “Nothin’ But A Good Time” option if you will.

Or you can do the singer/songwriter thing and “document the times” with your stories. Beans On Toast (the UK’s best exponent of this) has been doing that with a series of lockdown singles, for example.

Or you can do what Lamb Of God have done here. The Nuclear option. Jump in, document the times with furious anger, indignation and a wave of hate.

You can tell they mean it (they always mean it, but this time they really do) by the name of the album: Lamb Of God. This is not your motherfucking invitation. They are here, and they have plenty to say.

Not a “lockdown” record (in fact its release was delayed when the early days of the pandemic hit) it is instead an excoriation of Trumpian America.

The first single on the record – and its first track – “Memento Mori”, is translated into English as “remember you must die” and the spoken word opening only adds to the feeling of lurking, impending doom that exists. There’s a touch of Corey Tayler about it, but when it explodes – and there is no better word for it – then it is pure Lam Of God.

There is no other band that sounds quite like this. Ferociously heavy, with the anger of thrash, and with D. Randall Blythe’s vocals ranging from guttural roars to melodic almost in the same word. They’ve got it perfected.

New drummer Art Cruz – ex of Prong – has fitted in too. There’s a beatdown in the middle of “…Mori” with which he essentially announces himself, and this level of quality – and this sound more to the point – continues throughout.

“Checkmate” begins in a relaxed atmosphere, as both Mark Morton and Willy Adler trade leads, but that’s only so when the blows are landed you don’t see them coming. LoG, more than many bands, seem to write brilliant slogans, and “the American scream” and “make America hate again” both appear here.

The two guitarists are stunning here – and to think I saw Morton acoustic as my first gig of 2020 – and their work on the like of “Gears” must not go underappreciated in amongst the anger. The fact they’ve always had so much going on is why they appeal to people like me who might ordinarily declare this sort of thing “too heavy for me”. Never is this shown better than on the wonderful “Reality Bath” which concerns itself with the awful school shootings “eight years old and already scared to die”, speaks the words with real intent. That all being said, you want a moshpit? This has got you covered too.

The album doesn’t get heavier than on “New Colossal Hate”. A real nod to their early days. This is savage. “Resurrection Man” balances it out a little, beginning in a rather eerie fashion, “I was born in a cemetery” offers its first line, and throughout the lead sound is one that is just a little nightmarish.

Jamie Jasta trades lyrics with Blythe on the slashing heavy metal that is “Poison Dream” and there’s another special guest as Testament’s legendary singer Chuck Billy does his thing on one of the highlights, “Routes”. Maybe because of his presence, this is the most “thrash” as it were, but “Bloodshot Eyes” which follows, has a tinge of modern metal about it – not to mention  groove so thick you could ride it all the way home.

The last one, “On The Hook” deals with the issue of the people in being failed by the USA head on, with customary (and completely correct) seething, burning anger. “A generation on the hook” spits Blythe, and on a record that frequently sounds like its being delivered through gritted teeth and with a clenched fist, never hits the target more firmly than here. Not for nothing are the last words on the record: “kill them all….” As if they’ve all been given a death sentence.

Lamb Of God are, in many ways just following the long line of thrash with a social conscience. It is only right after all, that a music that needs anger can always find subjects, but whether its Megadeth or Machine Head, or Sacred Reich or whoever you want to add, then there is something laser guided about this.

“Lamb Of God” might just be more than the state of the union 2020. It might be their defining moment.

Previous article
BAND OF THE DAY: I AM KORNY
Next article
REVIEW: WAR AFTER WAR – NO CHANGE (2020)