Donnie delves deep into the world of Apocalyptic Folk to discover the end of the world is far from nigh. 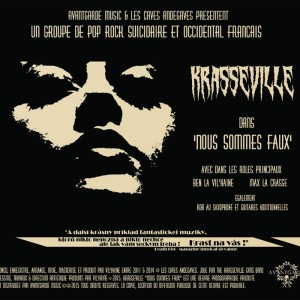 There is madness afoot here. Off-kilter would be an appropriate take for this collection of music for the doomed. There will a hundred or more other descriptions that would be just as powerful, perhaps using the band’s own powers of description might be the best option.

“Suicidal & fashionable western French rock music” is what the band Krasseville have come up with by way of explanation as to their strangely hypnotic new album Nous Sommes Faux. We shall go with that then.

The intro sets the tone with it haunting organ refrain before introducing an early 1990’s Tarantino/Lynch-esque soundtrack to the apocalypse. “Nihil Time Funeral Process” follows and gives us the first indication of what is going on inside the combined heads of this unorthodox band of black metal brothers from Western France. Imagine Nick Cave in a sombre mood. Curious though is the lack of Black Metal on the album and the lack of any type of metal in general. This is a band who are taking their ball and playing in someone else’s garden.

Their side band Ordo Blasphemous has provided them with their underground blackened fix and now they have come up for air, although they cannot escape the harshness and desolate nature of their musicality.

These are essentially short pieces of music woven together with razorwire and bolts that at times enlighten and at others disturb. The lyrics are infrequent and few, and are also in their native tongue. Despair not, you don’t need to be a Francophile to get the general gist of what’s going on. The music speaks far louder than the words.

Instrumental tracks like the acoustic roll of “De sangre y mugre” and“Tete creuse” provide the lighter end of the spectrum but even then there is a an eeriness to them that conjures images of wastelands and general bleakness that’s impossible to escape from throughout the album. Atmosphere plays a huge part on this album and it overlays every track and is as important as any of the varied instruments on display.

Kudos must also go to the production team for the sterling job on achieving the right balance. The array of instrumentation from organs to violins to guitars to horns takes some balancing.

It’s difficult to say that this track is a great track like you would with most albums. It really does benefit from being listened to as a whole rather than picking individual tracks. Fans of dark soundtracks will love this and if a film was made it would no doubt be fascinating viewing. There is a blending of styles here from neo-folk to avant-garde to French rock that few bands would be capable of pulling off. Krasseville are one of the bands that can.

For now though we have only the music and that will do nicely. Give yourself around 30 mins, get yourself a glass of whisky turn the stereo up and take an audio trip to Krasseville.

Nous Sommes Faux is out now through Avantgarde Music