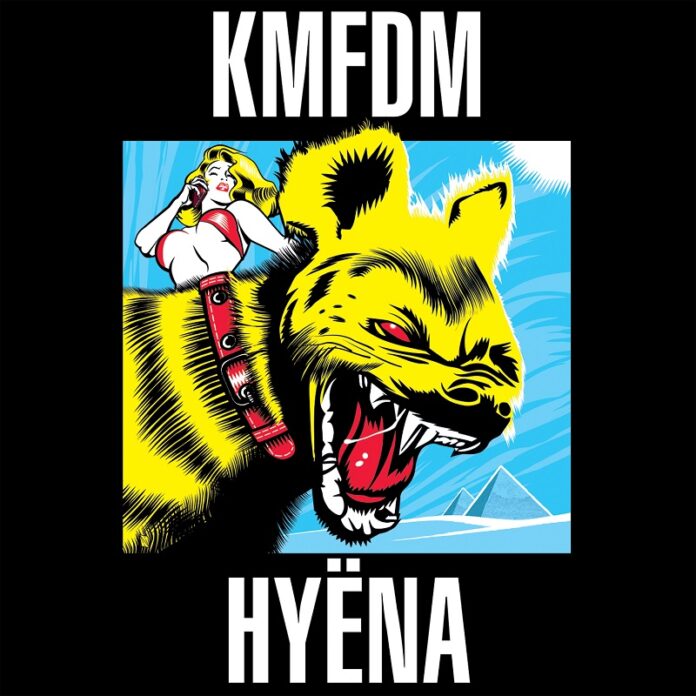 In the end, it all comes down to this:

“I’m a rock n roll monster with a bass guitar”.

That’s the hook on “Rock N Roll Monster” the second track on the 22nd album from KMFDM, but its also the track that convinced me to write about “Hyena”.

First of all, its brilliant. All sleazy riffing and horns. Over a rap from Andrew “Ocelot” Lindsley (he’s returned to the fold this time around) which contains the immortal line, “I’m not tipping cows, bitch, I’m opening silos” (I don’t know either, you’re fine). It’s the sort of crossover stuff that I’ve loved since I was about 16 years old and Public Enemy brought the noise with Anthrax. Moreover, its exactly the reason that this website is called Maximum Volume Music. Music should be a melting pot, it shouldn’t be listening to Motley Crue’s “Girls, Girls, Girls” for the millionth time on Planet Rock.

But it does present me with a very real problem. See, those 22 records? I haven’t ever listened to one before this. I mean, I’ve heard the odd tune (I am a Ministry fan who loves Never Not Nothing for goodness sake), however if eight years of doing this site has taught me one thing, its this: someone always knows more about their favourite band than you do, even if it’s your favourite band, so you’d best ‘fess up.

“Hyena” is everything in the history of music. And that’s just on the opener “All 4 1”.  It’s hyped up, its angry. It’s a clash. And it is immensely catchy. Usually these records are tough to listen to however good they are. Not this thing. This is as big and brash as anything. Ever. “Salute those about to rock”. A 21 gun salute, indeed.

Dress it up however you like and this is basically a rock n roll record. Lucia Cifarelli struts about on “Black Hole” and as much as this is raging at the world around it, then you kind of feel it would like to party in an underground S&M club at 2am, (which I imagine sounds like this)

The guitars of guitar wizardry of Andee Blacksugar (and you don’t know how much I hope that’s his real name) is wonderful throughout, but the title track, on which New Model Army go disco it seems, stands as his masterpiece here.

I haven’t been in a club unless its for a gig since about ’99 (there was a girl involved) but I am not going too far out on any limbs to suggest “All Wrong But Alright” could fill the dancefloors still. Hardcore artist Sissy Misfit is responsible for the vibe and if the girl who was involved – who I see most nights walking home from work – fancies a reprise, I am down.

There’s a serious side to this brilliance though, and its this: Whatever the Ultra Heavy Beat do, whether the punk of “Blindface” or the reggae infused “Déjà vu” (which destroys Trumpism and the riots on Capitol Hill) it does it incredibly, and on its own terms. Not least on the former, which has an organ lick that most punk records do not.

“Deluded, Dangerous, Desperate And Dumb” might sound like the worst Tinder Profile ever, but I defy anyone not to listen to it and think the manifesto it presents is a damn sight better than that which Thick Lizzy gave on the steps of Downing Street this week. And there’s more yodelling.

Even for this record “Immortally Yours” is weird. Oddly discordant as Cifarell delivers something that is by turns menacing, brooding and almost like one of those Symphonic Metal bands. That contrasts beautifully with the heavy, shining and stomping “Liquor Fish Cigarettes”. Which not only pronounces KMFDM to be as “risky as a knocked up nun”, but it also reckons that they are “mercilessly kicking ass.” The latter is true.

All of this ends with a summer tune. Kumar Bent arrives to give “In Dub We Trust” a fresh look. They’ve done this type of thing before. It’s both mischievous and fun. In honesty, “Hyena” is whatever you decide it is. A thousand people could hear it and hear it in a thousand different ways. It almost feels the record is named what it is because the band are laughing along with us at the state of the world.

That all being said, whatever you hear and however you listen to it, I’ll wager you conclude that on any level, it is truly stunning.