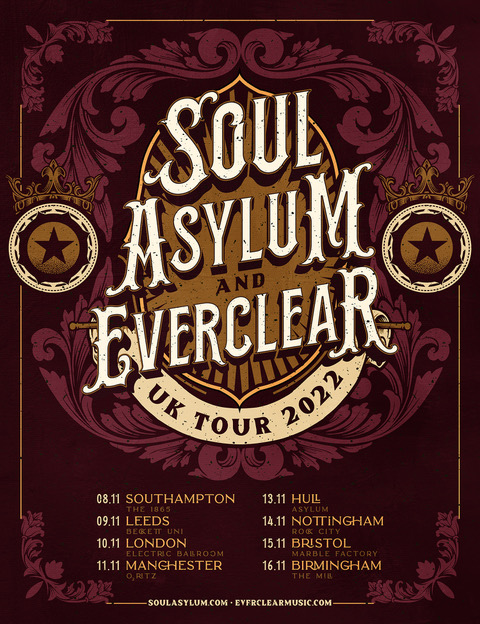 Cult American alt-rock bands SOUL ASYLUM and EVERCLEAR will be heading out on tour across the UK this Winter.

Kicking off in Southampton on 8 November, the run of live dates will see stops in Leeds, Manchester, Hull, Nottingham, Bristol and Birmingham.

Since the ’80s Soul Asylum have been one of the most inspiring and hardworking bands in the rock scene, known for their raucous but emphatic combination of punk energy, guitar-fueled firepower and songs that range from aggressive to heartfelt.

The Grammy award-winning and multi-platinum selling band started out as Minneapolis’ punk younger brothers to the Replacements and Husker Dü, before releasing their breakthrough album ‘Grave Dancer’s Union‘ in 1992. With twelve albums, live compilations and a Greatest Hits collection under their belts, Soul Asylum released ‘Hurry Up And Wait’ in 2020 to both fan and critical acclaim worldwide, landing the band their highest Billboard Chart position since 1995. Heading into this year and beyond with more touring and recording on the horizon, the band are refreshed and ready to embrace whatever comes next.

Marking their 30th anniversary as a band this year, Everclear have kicked things up a notch in 2022 as they celebrate the major milestone amidst a career already filled with huge achievements. After forming in Portland in 1992, Everclear released their full-length debut ‘World of Noise‘ a year later.

Amassing a range of fan favourite hits with the likes of “Santa Monica” and “Father Of Mine“, Everclear have sold over 6 million records, achieved four gold or platinum albums, and twelve Top 40 Singles alongside a 1998 Grammy nomination.

Releasing their most recent album ‘Black Is The New Black‘ in 2015, Everclear don’t plan on slowing down any time soon. With the upcoming UK run capping-off nearly a full year spent touring, the band will be celebrating their enduring legacy and ongoing appeal as a live band.

Two seminal rock bands of the US scene, catch them at these dates and venues as follows:

Tickets go on sale this Friday @ 10AM here: https://www.seetickets.com/tour/soul-asylum-everclear