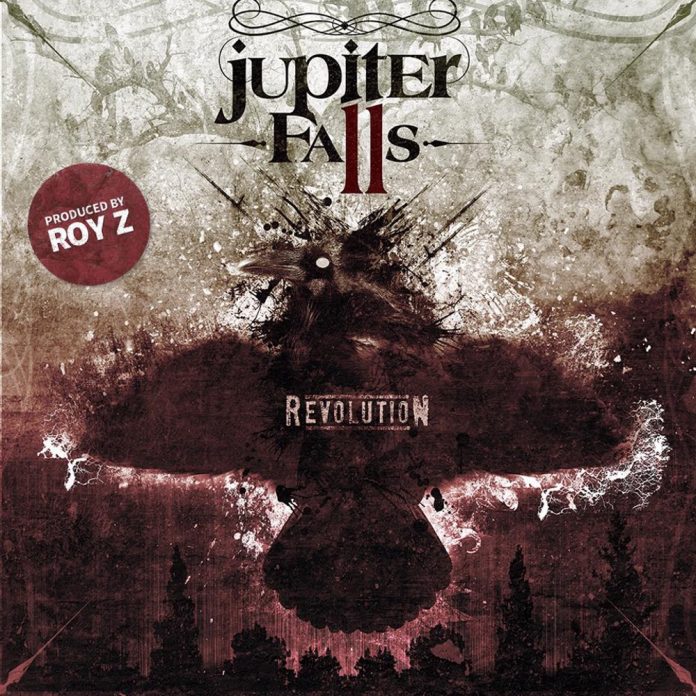 Unashamedly big rock from Leeds gets the pulse racing

Allow us, if you will, to take you back a year.

This reviewer had tickets to go and see Ozzy’s old guitarist Jake E Lee in concert with his band Red Dragon Cartel in Wolverhampton. Upon arriving at the venue it was shut. Lee wasn’t playing. Reasons for why differ depending who’s Facebook post you believe, but leaving that to one side, the no-show robbed us of the chance to see the opening band for the evening, Jupiter Falls.

The young Leeds based rock band had come to our attention before that, when it came to light that they were recording their debut record with Roy Z. It was the legendary Z, you might recall, that Bruce Dickinson turned to to make his solo records in his Maiden hiatus. Now, finally ready for release (it should have been June, but it’s now out August) is Jupiter Falls debut “Revolution” worth the wait?

The answer is unequivocally, yes!

As big a show of ambition as it was to get Z in to make this, the record matches up to the aims. This is unashamedly big, bold and brash rock n roll. It’s not the sort of record to hang around limply on its own looking at the CDs at the party, it’s the sort to be holding court and having the time of its life.

That much is perfectly obvious from about a minute into its opener “Awake.” The riffs are huge, the musicianship brimming with self confidence, over a sort of Maiden idea of a track. But if you think that’s what Jupiter Falls are about, then it’s best you think again. “Chase The Dragon” is a real high point, but has very little whatsoever to do with the opening salvo. Rather this is one of the best songs Skid Row never wrote, and would, in the late 1980s have seen these boys on the front cover of Kerrang (and probably Smash Hits). If there’s any justice it’ll still make them famous, as its a quite astonishing three hedonistic minutes.

“To The Point” carries this theme on, making it a little more sleazy and sounding not unlike Ratt, but never ones to settle they are soon off on another tangent, and “Forgiven” is a strident, pounding modern affair, with half an eye on the front page of 21st Century Metal Hammer.

And so it goes. There’s barely a duff second here. “Story Of A Liar” is all talkbox led groove and big chorus and there’s a stab at grandiose balladry with “When The Time Is Right.” It would have seen lighters in the air, now it’ll get mobiles twitching. “World War Three” is, for this bombastic record, stripped down, relying on a plaintive cry that we should all make this world a better place.

There’s a third tear jerker on the album, and if you thought the power ballad was dead, then “Someday” will likely convince you otherwise.

Remarkably, they still aren’t done. And there’s another couple of genres to hop round. “Le e Quella” is a pretty decent take on a staccato, kind of Between The Buried And Me type feel, and things close with “Where Are You Now” which features spoken word bits, piano interludes and shows that if they fancied writing a Dream Theater inspired album Jupiter Falls could probably do that too.

In fact, to be frank, there does seem to be very little that Jupiter Falls couldn’t do. If they were American then the press would be all over them. As they are from old Yorkshire rather than New York they’ll probably have to work harder to get noticed. The way the press works is another argument for another day, however. All we’ll say now is damn you Jake E Lee, because we missed something that was probably brilliant.