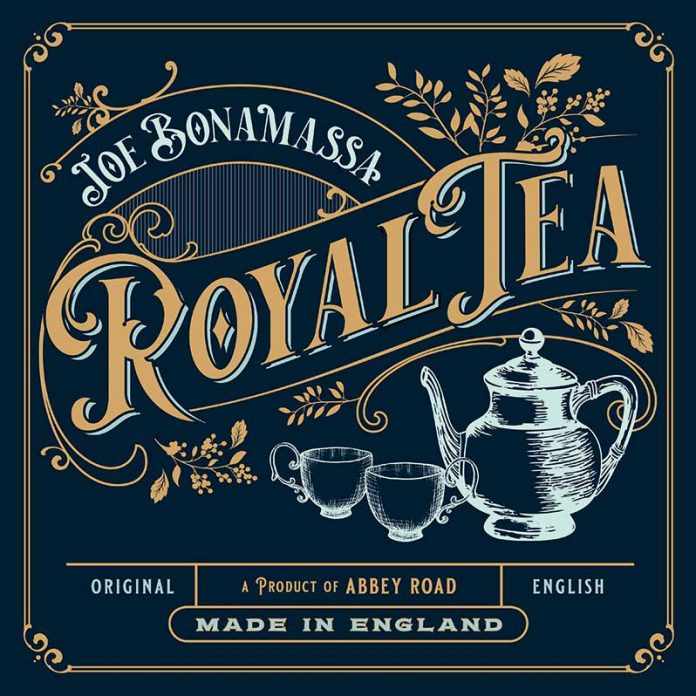 You have to admire Joe Bonamassa.

At 43 years old – two years younger than your humble scribe – there he is knocking things off his bucket list, all the while I am still trying to figure out what I am going to do when I grow up.

“Royal Tea”, however, seems particularly special. This is “full circle” if you like. Anyone who has followed JB’s career over these last couple of decades and goodness knows how many albums (I think this is the second of his that I’ve reviewed this year) knows the special place that The British Invasion bands have for him. Good grief, he’s played full concerts where he’s just played the songs of Clapton, Cream, Jeff Beck and others.

So, when the whole operation decamped to Abbey Road, for “Royal Tea” it was always going to be an adventure that would be treated with love and reverence.

Plus, the songs are written with Brits including former Whitesnake guitarist Bernie Marsden, ex-Cream lyricist Pete Brown and Jools Holland.

And you know what, it’s another departure for Bonamassa. Not so much that you can’t tell its him, but enough that it doesn’t sound like anything he’s done before. Which I suppose was the point.

“When One Door Opens” is an epic. If it’s a British film then it’s a period drama, the lilting string opening, the mighty groove when the band kicks in, before a genuine hard rock riff at the end. It might well be that its at the start to make a statement, to let you know that anything goes. If it is, it does the job.

The title track is a stomping, British take on the blues. Mahalia Barnes and Jade MacRae are two of the best backing singers around and their skill is right to the fore here. The song is apparently focussed on the royal bust up involving Prince Harry and Meghan Markle, whatever, its one of the best this has.

The slow building ballad “Why Does It Take So Long To Say Goodbye” is perhaps the most “typical” Joe song. The guitar line, certainly, could only be him, and it is neatly at odds with the blistering, bass heavy “Lookout, Man”, one of the heaviest, grooviest of his career. It’s a shame the lyrics aren’t particularly strong, but musically this is from the highest division.

“High Class Girl” boasts some wonderful organ (is there any kind?) from Reese Wynans, but the one that follows, is the one. “Conversation With Alice” (one of a clutch written with Marsden), with its incredible slide guitar, is apparently the most personal of his career. It is one of the best, too. And praise doesn’t get much higher from me.

There are occasions where everyone seems to be having so much fun making this. “I Didn’t Think She Would Do It”, with its driving, thumping energy, is one of them. This will sound brilliant live.

“Beyond The Silence” broods, and lurks menacingly, before breaking out, “Lonely Boy”, is horn drenched, and the piano is superb. The fact this is a co-write with Jools Holland is obvious even before you knew it was, and it’s impossible to listen to without smiling, I’d wager.

The last one “Savannah” (another written with Bernie Marsden), is even for this record, a a new turn. A southern rock thing, with an Allman Brothers feel, it is laid back and takes things in a totally different direction.

And “different direction” is perhaps the key phrase, here. Not a total new sound. This is not Bonamassa doing anything totally unexpected, given that you always expect him to challenge himself anyway. It is another different side to the artist, though. And here, the Made In England stamp at the bottom of the album sleeve is the all-important thing.