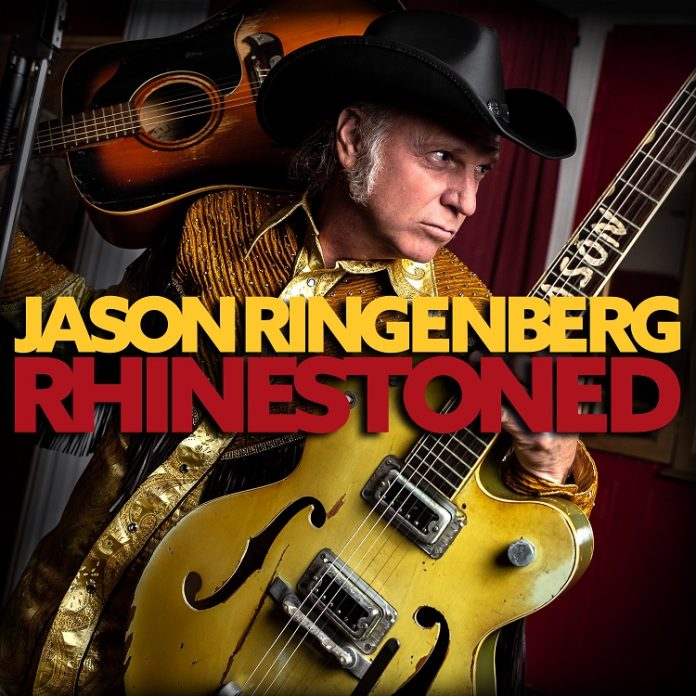 When this record popped into my inbox, it did so with a subject line that said: “the new album by Cowpunk legend Jason Ringenberg”.

And that concept is interesting to me, because Ringenberg is a legend, to me and many others, he really is. He is responsible for a change in my musical taste with the song “White Lies” when he fronted The Scorchers, and one of the best things that’s happened in the six years that I have slaved over this website was when I got an email from “Farmer Jason” thanking me for a review I’d written of “Stand Tall” – the album that had effectively announced his comeback. Farmer Jason is Ringenberg’s alter-ego and that was surreal to me.

And yet, ask the average man in the street, I guess, and none of this matters. Which brings us to “Rhinestoned”. If you are a Ringenberg fan (and you’d best believe I am) this is perfect. This is exactly what you want, but its tinged with a personal frustration that the last time I saw him play it was in front of a 100 people in a folk club, not where I believe he belongs.

It might be that he’s happy with his lot, its just that listening to “Before Love And War” – with some wonderful harmony vocals from Kristi Rose – it has such class, such skill, and such originality, that you want more for him.

The “originality” is important, because I listen to a lot of country music, and I’ll tell you now that none of it sounds like this. None of it has the lyrics of “The Freedom Rides Weren’t Free”, dealing with the black activism in the 1960s.

It’s interesting, perhaps that this album is set – it seems – in Nashville. Ringenberg (who if I recall is an Illinois native) lives in the town, and if the last one was hewn from the rocks of the National Parks and the mountainous terrain, this one is infused with the ghosts of the past. “Nashville Without Rhinestones” is a perfect example.

The album was, he says, written in lockdown. He kept a pad by his bed and got out of bed with songs pouring out of him. “Once I Rode With Crazy Horse” might underline that. Coming to him in dream, in many ways it’s the microcosm of what makes Ringenberg so good. No one else would think of this. No one else could pull it off, yet there’s no self-indulgence here. This is crazy, but catchy. Not wacky, just unique. That’s how I see him as an artist.

“My Highway Songs” has the longing, the years on the dirt road, the feel of that man I saw with his battered old acoustic a couple of years ago, it flows through his veins. It is in him, which he explains a little later on in the record with “Stoned On Rhinestones”, which first of all suggests the wildest he got “was jelly on toast”, before he heard Hank Williams. Then all bets were off.

“Keep That Promise” is the one that Jason And The Scorchers fans should gravitate to first. This is cowpunk. Done by the master of the craft, while “Window Town” could be on a Steve Earle album, which is meant as high praise.

There’s some covers too. These – he explains – are to represent the different phases of Americana music, and range from a traditional hymn, The Carter Family’s ‘The Storms are on the  Ocean’, Hank Sr’s ‘You Win Again’ to the Ozark Mountain Daredevils’ ‘Time Warp’. It doesn’t much matter though, as they all sound like Jason Ringenberg, or at the very least have his stamp.

A warm record, in the way all his work seems to convey a real warmth – his daughters even sing backing vocals here – Jason Ringenberg is a rare talent. Legend? To some. Not, you suspect to the man himself. I reckon he’d prefer maverick. That’s the sound here.