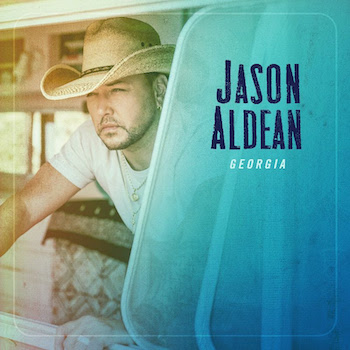 Every so often, idiots (ironically usually with an album to sell) tell you the “album is dead”.  Thankfully that nonsense has evidently never got anywhere Macon, Georgia.

Jason Aldean is arguably the biggest star in country right now (his record sales are still counted in the millions and his streams in the billions) and he says this: “We’ve always tried to lean toward more songs than less…and this album is no different.” It kind of is, given that “Georgia” is the second album in five months and a companion piece to “Macon”. It follows the same format – in all senses – but specifically it has 10 songs and five live tracks at the end.

“Whiskey Me Away” starts the thing as it means to go on. There’s a cowboy with a broken heart. There’s a bar. There’s a girl. There’s a massive chorus and there’s an arena shaking guitar solo. That’s basically the premise throughout.

“Trouble With A Heartbreak” (on this one there’s no new girl, just the memory of the old one. And whiskey), is so universal that if it doesn’t apply to you, you’re a liar – and therein is the point. That’s why Aldean works. His songs apply to me, you, and anyone else.

This one is mostly mid-paced things and everyone a solid gold hit. “The State I’m In” is perhaps the best, because the chorus is so damn catchy that there’s a cream for it at the chemist, although “Midnight I’m Missing You” is the type of thing that Bryan Adams (who Aldean covered on the last record) would have trousered a Gold Disc with in 1986. What it lacks in originality, it has in polish, that’s for sure.

“Ain’t Enough Cowboy” merrily makes for the top 10 with more autotune than Justin Timberlake (and to borrow a line from Bon Jovi, this is the soundtrack to losing more than that on backseats all over America in 2022).

“God Made Airplanes” puts distance between the girl and the cowboy, and wraps itself around a hook that you can hang your biggest Stetson on, “My Weakness” – and I know what you’re thinking is the weakness the bar, or the girl? It’s the girl – is the type of thing that you’d have got on those “Driving Rock” compilations in 1989, the sort your Auntie always brought at Christmas as “you like music, don’t you?”. “Holy Water” has some wonderful slide guitar, really mournful and full of regret (there’s a Preachers Daughter involved) and “Rock N Roll Cowboy” contemplates giving it all up. No one is convinced. Least of all, Aldean.

“Your Mama” is maybe the most country. You can file it in the pile marked “not my thing” if you like, next to “Don’t Cry Daddy” by Elvis, or any other saccharine sweetness, but what do I know, they’ll lap it up.

The five live songs are really interesting, because they are nothing like what has gone on before, frankly. “Take A Little Ride” is as rocking as anything in the Free World, the ballad “Burnin’ It Down” has a tough edge, “Any Old Barstool” is as southern rock as you like, “Rearview Town” – a number one hit – is absolutely superb, and 2020’s “Blame It On You” smash has new life breathed into it.

All of which leaves the question: which is the real Jason Aldean? The answer, probably, is all of them. The rocker, the popper and the one in-between. He – together with producer Michael Knox – is fantastic at what he does, too. “Georgia” proves that, and it will resonate way beyond the south.