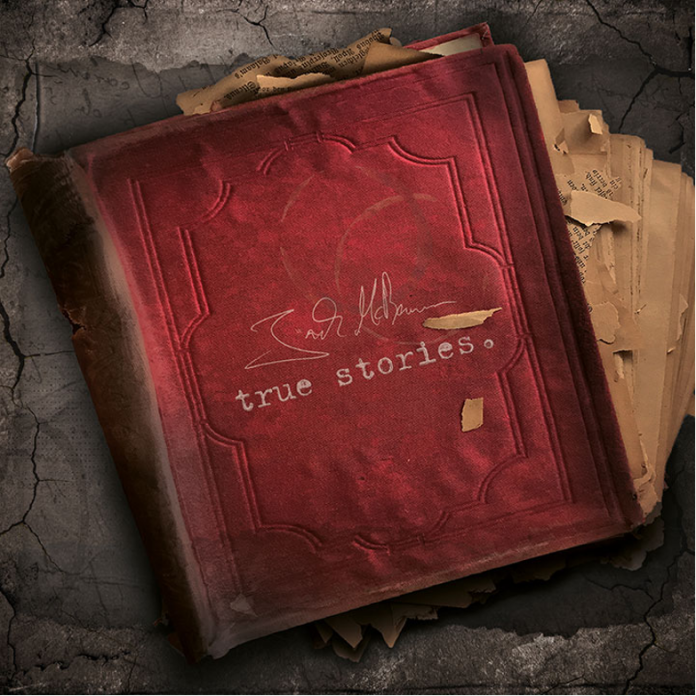 played in LA and by your side

played a thousand other city’s

the road’s my life.”

If you want to understand “True Stories”, then look no further than that. Look at those words and you’ll see what drives Thorsten Willer – the man behind the Jack McBannon alias, to do what he does, to make these solo records. It’s in him.

There’s a feel that “True Stories” has been ripped out of him and put on the page. Frankly – and this isn’t meant as a criticism at all – it sounds more American than European, certainly the opening salvo of “Right Here” is the sort of thing that I’d usually add epithets like “blue collar” and “heartland” to, but what matters is the class.

When this hits top gear, as on “Set Me Free”  it has the potential to really cross over, there’s a guitar solo that Richie Sambora might have attempted on “Stranger In This Town” here for example.

There’s an effortless size about the sound here. “Snowflake” is like U2 in its widescreen scope, “Together” which takes the modern world to task for living through its phone is cut from the same cloth – and there’s little doubt he’s got a point.

If you could categorise “True Stories”, then its stories about the underdog. “Here’s A Winner” takes the tune for Jovi’s “Someday I’ll Be Saturday Night” and updates the lyrics, essentially, and there’s US country stars all over the place who would be listening to “Dancing In The Rain” and feeling jealous.

However there’s also some kind of darkness – a bleakness if you like – that goes through it as a thread “An Outlaws Inner Fight” heads to some bluesy swamp, while the album’s “rockiest” moment is undoubtedly “Motel 81” – “we’re on the other side of ordinary, the other side of why” he sings rather euphemistically, and put it this way, what’s in here makes “Hotel California” look like Center Parcs.

Clearly a talented musician, McBannon is able to deftly switch gear, plumbing some depression on “Walking In The Dark”, while on the other side of the coin he does the lovely, fragile piano led “Runaway Me”, with its first line: “the reason I am a traveller, is the reason I feel alive”, is all the proof you need that this is more than a career.

There’s all kinds of incongruities though. On the one hand McBannon appears to be the kind of fella that you could see on a Tuesday night in the local folk club, just him, a glass of whiskey and his battered old acoustic, pouring out his heart in the corner. Yet, he’s signed to a metal label and there’s a bombast to his sound and there aren’t many German’s called McBannon.

So where the character starts and the real man ends is a moot point, but I couldn’t care less. All that has ever mattered to me is the music, and in the case of “True Stories” it is superb.