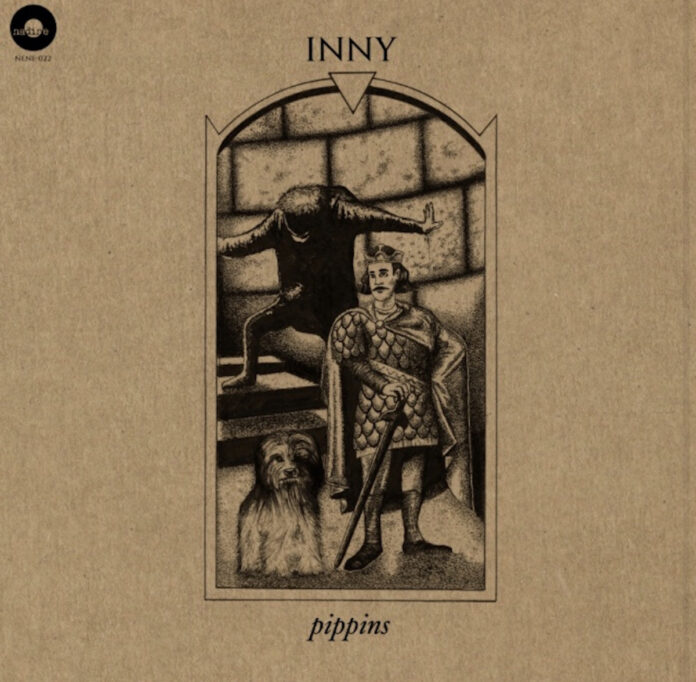 The press release or blurb that usually comes with an album most times bears no relationship to the actual stuff that you end up listening to but with Inny and their `Pippins` album I have to say it was pretty much on the money..

It read – Born out of a need to preoccupy their own anxieties, Inny was formed in Portland, Oregon  during 2018. Brody M plays guitar and sings, bringing a variety of succinct, catchy riffs and reflective lyrics to the table. Dan and Toby (on bass and drums respectively) help augment, flip-over, and arrange the songs from their seemingly simple roots into a deeper dynamic horizon. At its base, INNY is three really good friends who have been playing music together for the better part of a decade. Their sole mission being to write meaningful songs and have fun doing it.

The album opens with `The Tally`  which sort of emerges quietly before it hits you between the eyes. The number seems to reflect somebody who has a kind of plan in life and will no longer be distracted from achieving it. They recognise the mistakes they`ve made and seem to be distancing themselves from those who will ultimately hold them back. There`s a kind of anger in the musical backdrop and a hint of defiance in the vocals shared. The track slows down slightly towards the end and has some blistering guitar riffs before closing out. There`s a more bass led offering with `The Lotto` which gives it a sort of edge or sense of anticipation for what may follow as the number deals with snide remarks of bullying and how maybe this time the tables will be turned.

`A Cold One` may or may not refer to grabbing a beer to self-medicate from all the shit that`s going on in your life and what`s being pumped out by the media. It a noisy angry almost cathartic release of frustration with pounding drums, throbbing bass, scorching guitar chords and enraged vocals.  There`s a short time out towards the end where we have a brief spoken word dialogue before it returns to tit`s previous angst ridden path. We have a kind of jarring stop start nature to `A Fool` which enjoys all sorts of additions as it progresses with some intricately shared guitar chords and almost pleading vocals. A song that may relate to childhood parental indiscipline.

The wonderfully titled `The Soup And Its Mass` is nigh on two different songs in one. It opens with a kind of angry energy at pace before slowing midway to become thoughtful and almost prog rock like. I wasn`t too sure as to what the lyrics referred to as they seemed a little surreal to me, maybe metaphors that were beyond my understanding.  We have a more mid paced submission with `The Abomination` but it evokes no less anger for that. It seems to indicate the soul destroying nature of jobs that involve caring for others on a minimum wage.

`The Eternal Contest` may well equate with just coping with life and understanding the potential dangers  faced with stepping outside of a safe environment. There`s an edgy fast paced beginning which then segues into a brief reflective passage before resuming its original direction and finally switching to a churning reggae tinged punky conclusion. Title track `Pippins` seems to be a more introspective or thoughtful musing on possibly somebody`s mental health struggles. The musical accompaniment mirrors this more pensive reflection.

The album closes out with `A Luxurious Crypt` which is noisy, thrashing and has a  pummelling sensibility for the majority of its life cycle but does veer off towards the end with a musical jam like finale.

`Pippin` is defined in dictionaries as either a crisp, tart apple or a highly admired or very admirable person or thing and this probably describes Inny`s album `Pippins` better than I ever could.

Inny manage to meld or fuse energetic punk, noise rock and post-punk in a kind off controlled aggression that will hit you right at your heart and soul.

`Pippins` is around forty minutes of no nonsense blistering noise with lyrics that will get your grey matter working. It`s an album not for the faint hearted but will certainly get your blood pumping.

Put time aside for Inny and `Pippins` and I assure you it won`t be time wasted.