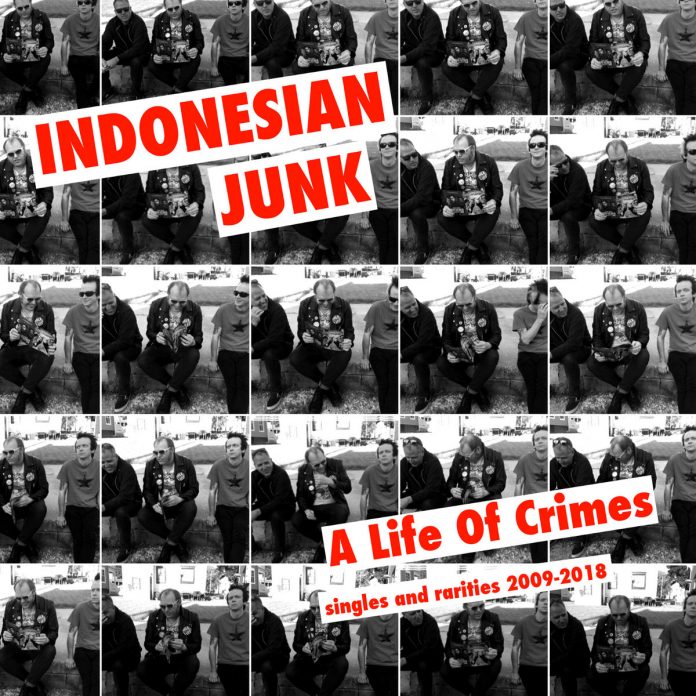 There is a great joy in these type collections. Always has been, always will be. It makes me feel nostalgic. The best bands in the world always understood the importance of singles and standalone releases.

The internet is great for many, many things, but it has killed things I used to love, like rummaging around Reddington’s Rare Records in Birmingham on a Saturday morning finding gems, it’s ruined tape trading, and its destroyed mail order record clubs.

Now you can find everything at the click of a button and download it straight to your phone, the communal experience is gone. The postman was never out of my drive in the late 90s delivering the latest Swedish punk n roll that I had gone mad for, the latest Backyard Babies 7inch single only release of an unreleased track that wasn’t on the album, and my how you’d tape it for your mates and share it around.

I am going on a limb here and say Indonesian Junk understand that feeling, they were those guys, the ones who just had to have the full discography of the Chuck Norris Experience else they couldn’t rest at night (maybe that was just me?).

Whatever, the point is the 13 songs here on “Life Of Crimes” deserved to be collected together and put in one place. They are scrappy, rough around the edges, scuzzy little fighters, but they are made by guys that only wanted to make music, drink some beer and have fun.

The first one actually comes from a single that I reviewed, “C’Mon N Love Me” was one of the tracks on 2018’s “Darkness Calling” and even if I …urmmm….don’t particularly like Kiss (runs away and hides for fear of reprisals) then this version has the danger Stanley and Simmons lack. Where they would sell you a lunch box, this would beat you to death.

To be truthful I am not familiar with “Pill Box” or The Joneses, who did it originally but it’s a glam thing here for sure. The reason I like Indonesian Junk is that there’s a sort of unhinged darkness to them. Their own original “Crimes” is as nihilistic and bleak as The Stooges, and even the one that follows “Last Night Alive” is more straight ahead rock n roll, but still Daniel James sounds like he’s been sniffing glue all day and fancies a ruck – and he’s capable of whipping up a mean riff too.

“Now That It’s Over” – the last of the songs on “Crimes” – showcases a more power pop side to them, a Cheap Trick sense of melody if you like (and given their name, lets not be shocked). A path that 2010’s “Nothin’ I Can Do” single continues to walk – but if the music sounds happy, then the words most assuredly are not.

The three that are from “….Do” are perhaps the best. “I’m So Bored” seethes with small town frustration and makes it brilliantly punk and “If He Knew” does more in two minutes than many bands from that era did on whole albums, frankly.

“In This City” is the type of standalone single that would have had me parting with money 20 years ago and its B-side (I just hope it came out on coloured vinyl) “What Do You Want?” is even better.

The last three are unreleased from sessions in 2015. Fans of the band will be glad they’ve seen the light of day. “Situations” a cover of Brit Punks Slaughter And The Dog is given a real US tinge, the self-penned “Since That Day” is more garage based than the others, and its always fun to hear anything by Starz, and “Outfit” is as sleazy as it gets.

That one raised a smile, because I heard Starz because I am a geek. I’ll explain. The Wildhearts have a song called “29x The Pain”. To this day they often finish their gigs with it. It was never on their albums and is about their record collections. When I heard this song I set about listening to every band mentioned therein. Starz were. So I did. Somehow that seems fitting here and I reckon Indonesian Junk would approve.

This one is for the fans of course, but what else could it be? Above I wrote something that needs clarification. The Milwaukee band, I’d said, were the type that “wanted to make music, drink beer and have fun.” I’d missed a word out. “This music” I should have said.

The tape traders, the geeks, the ones who seek out new things in case they miss something. That’s who “A Life Of Crimes (singles and rarities 2009​-​2018)” is for, and Indonesian Junk should be very proud of it.