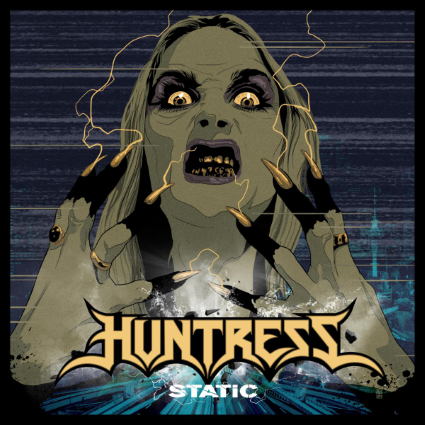 Huntress keep it moving, and add their own electricity

Everyone knows the back story by now. At its most basic it’s this, classically trained New York based singer is a DJ and seriously big deal out on the East Coast. She moves to California, watches an underground metal band and takes them as her own.

And that’s basically how Huntress were born. Now, about six years later and with the core of Jill Janus and guitarist Blake Meahl still around, they are onto album number three – and “Static” is their most polished and accomplished work to date.

It lays it’s cards on the table early. A thumping overture, a rapid-fire guitar solo and the opening line “I’m high all the time” and we aren’t even thirty seconds into “Sorrow”, which ostensibly appears to be a song about depression, but it is attacked with such vigour that it really could concern anything, it doesn’t matter.

That’s almost Huntress in a nutshell right there – on this album certainly. Contrary to the title, it’s got places to go and it’d like to get there as quickly as possible, thank you. There’s an urgency coursing through it, but there’s a compelling mysticism and just a hint of menace too. Songs like “Brian” get that balance just right.

And, we might as well get it out of the way, the whole thing drips with sex. Janus is an attractive woman, but she’s also a captivating one and having been a room with her (interviewing Meahl while she was conducting another interview elsewhere) MVM can attest for her presence too, so when she’s singing a song like “Flesh” – about a lesbian Prostitute preying on women, and contains lines like “I’m in lust” and “sister I ain’t gonna lie, unless it’s on your flesh” it’s safe to say she knows exactly what she’s doing.

Throughout, “Static” is a record that is more than happy to take chances. The eight and a half minute epic of “Mania” is perhaps the best example of this, but it’s far from the only one. A huge, Sabbath type of 1970s vibe permeates – and there aren’t many bands better at writing lyrics which could also be slogans than Huntress. This one begins its verse with “if you ever spent a night in my head, you’d be dead.” It hooks you in, and more generally the band hook you into their web.

There’s an admirable variety to their metal brew too – when MVM saw them it was as support to Amon Amarth and they weren’t out of place in that company – and they are happy here to switch between the doomy vibes to the gallop of “Four Blood Moons” and the title track, while “Harsh Times On Planet Stoked” is a fists in the air type chugger.

It’s clear that the band know just how important this record is. They pulled Jim Rota of Fireball Ministry in for Production duties – Rota had worked with that tiny, up and coming outfit Foo Fighters on their recent “Sonic Highways” project and he and Paul Fig have constructed something that sounds sonically magnificent.

It ends with “Fire In My Heart” which might have an opening riff that appraises Bon Jovi’s “Raise Your Hands” but has nothing much else to do with JBJ’s boys elsewhere.

Except perhaps one thing: third albums were historically seen as the breakthrough record. The aforementioned Jovi with “Slippery When Wet” and going further back, Springsteen with “Born To Run. Whether “Static” does something similar for Huntress only time will tell, but it’s absolutely certain that have pulled out all the stops to make it happen.