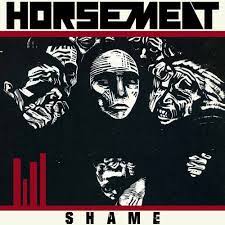 If you were sent a single by a band called Horsemeat the chances are you might imagine that they were a doomy sort of thing. Riffy, greasier than a box of KFC. At least, if you are anything like me you would anyway.

In honesty, where this three piece are concerned, you’d not be far wrong. Well, not if you added a healthy dose of Helmet, because “Shame” is less meaty, more a basic concrete block to the skull.

From the second that Bert Genovese’s riff hits, this is uneasy listening – but it has plenty to say about the misinformation of social media. “Troll the trolls” he …well….what he does is kind of a moot point, seeing as you can’t really call it “singing”. Rather Genovese sort of warns. “Nothing is true, you’re better than this.”

Except we aren’t, are we? We’re a dreadful bunch of people who live our lives for likes and shares, because we are conditioned to by society. “Nothing is true, everything’s real” it screams. Think about that, and think about what we’ve become. That’s not just the “metaverse”  that’s modern life.

Whether you agree with me or not, then  what is clear is “Shame” is nasty, gnarly and exists in its own foggy, fuzzy darkness. It’s the work of  a band that has a desire to innovate and go against the convention.

Get it. Like Horsemeat, you don’t really know what it tastes of but the thought is pretty nasty.