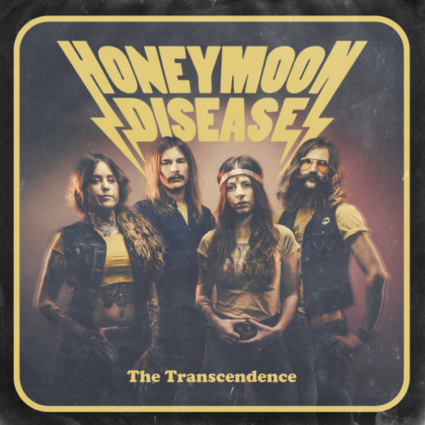 Catchier than an STI, and a lot more fun

Anyway, before you get carried away down a rather disgusting path, it’s best to make sure you have the right Honeymoon Disease. Allow us to explain. You see, put in Honeymoon Disease into a search engine and you don’t get rock n roll, you get, urmmm, something else: “Honeymoon cystitis (or “honeymoon disease”) is cystitis caused by sexual activity. The symptoms are the same as with cystitis triggered by something other than sex: burning sensation when peeing as well as the frequent urge to go to the bathroom.” Says Wiki. Good to know. Good job this half of MVM isn’t married, too. Such things make us blush.

That out of the way, and the word “band” added to all future searches, this particular Honeymoon Disease are a four piece out of Gothenburg. Two men and two women, and Swedish? Shall we mention ABBA now or shall we wait until later?

Thank Christ HD have nothing in common with the world’s shitest band (the ladies have better tattoos for a start) and actually have much more to do with fellow countrymen The Hellacopters. That’s not though, immediately clear from the start. The opening “Higher” doesn’t sound too dissimilar from something Ghost might try if they had a female singer, but pretty soon after that “The Transcendence” finds its groove and the band find their true voice.

A look at the cover photo tells you what they want to be. It’s a knowing glance to the 1970s. There’s great moustaches (this is the male half) and you aren’t too sure if it’s all a bit of a piss take. Even the merest, most cursory listen to the album however and you are totally certain. This is a record that the people that make it are absolutely cherishing.

There’s nothing fake about Honeymoon Disease whatsoever. “Imperial Mind” is ebullient, catchy and as happy as a kid on Christmas morning after Father Christmas has been – although what Santa’s sack has in store for this band in December probably isn’t worth thinking about. “Gotta Move” adds a slightly funkier baseline and an even catchier chorus. In fact, the thought abounds that if you are going to get dumped then this should be the damn soundtrack. You can imagine it being a Thin Lizzy track, and a good one at that.

The brilliant songs just keep coming by now. “You’re Too Late” is a less than two and half minute barroom boogie, but it’s incessantly superb and if the consequences of all the hedonism are “Breakup” then you’ll take the chance.

“Fast Love” (and no one actually believes it’s about a car as the lyrics claim) manages to be dirtier than than its title suggests – and when Jenna sings that “this is gonna get wild” you want to join in.

The Transcendence concludes with “Keep Me Spinning” which, after borrowing the opening chords of Aerosmith’s “Mama Kin”, gets retro bonus points for a swirling Hammond Organ and is rather more ambitious in tone than some of its brethren, even going for an explore of something approaching a jam at the end.

It’s getting close to party season (apparently) and if you must be festive you could do worse than have this as your album of choice as you get drunk and try and pull some girl that’s out of your league at the works Christmas do. Failing that, if you intend to stay in being miserable like MVM, use “The Transcendence” to cheer yourself up.

It’s so good it’ll do the job.

Previous article
You Have One Life
Next article
Shaper Shifters