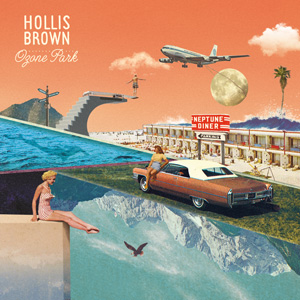 The other week I was at a gig in London, and I got chatting to a chap from Boston. Because American’s are much more open – it seems to me anyway – than us Brits, pretty soon I knew his name, knew that his brother in law had died from cancer and seen pics of his wife before I’d opened my mouth.

After all this: “where are you from, man?” “Birmingham” I replied. “Cool,” he smiled, clearly never having heard of the UK’s second city, “is that anywhere near Liverpool? The Beatles, man….”

All of this rather backs up the point of a PR guy that I have developed a rapport with over the years. Saying that I had travelled to another show, he replied: “we’re all slaves to rock n roll”.

Maybe, maybe not, but popular culture clouds our view of places, of people. The romanticised view that southern rock gives us of Kentucky for example, or New Orleans, where I am convinced that everyone is in some kind of second line and playing in a creole jazz band.

Then, when this came. It said that Hollis Brown formed in Queens. First thing in my head? “ooooh Queens, that’s where George on Seinfeld is from…..” But that’s not just me, that’s everyone, that’s how we feel connected with other places.

Area, locality, grounding, they are all particularly important to Hollis Brown, too. Not only does the title of this, their third record come from the area they formed, it permeates the sound too. As, singer/guitarist Mike Montali puts it: “Growing up in Queens I fell in love with all different types of music,” he recalls. “We had hip-hop, we had funk music, we had rock ‘n’ roll music, and we had singer-songwriters. Everybody in the band loves all those things, so it’s nice to try and incorporate all those things. We’re really open.”

And, this time, more than most times, there is a real feel of that in the music too. The ten songs that make up “….Park” are genuine melting pot, where those cultures, those flavours and tastes clash, and it means that what happens is something truly original.

“Blood From A Stone” is a proper funky strutter. The keys here are superb, and the harmonies are pure disco even before the string solo that recalled – to these ears anyway – The Bee Gees.

Montali in the build up to this reckons that this record is about relationships. “Stubborn Man” in that context, is reminding himself to be a better person: “come on,” he sings. “That’s just who I am, a selfish stubborn man”.

There is a real subtlety about the work here. The guitar line on “Do Me Right” isn’t brash, but it somehow creeps into the pores, and the pulsing rhythm sounds like Semisonic records I was buying 20 years ago.

“Forever In Me” is absolute pop music. Glorious, and proud, falsetto chorus has a touch of Prince about it, but its multi-layered textures are enough to make good on all Montali’s words on its own. The acoustics here are worth listening to the album for on their own.

Similar epic intentions are all over “Someday Soon” which is summery and bewitching, and isn’t the only one that has a 60s type vibe, either. The lead guitar lines on “The Way She Does It” come from the same place as those underrated mid-period Stereophonics records, and even if nothing here gets all that close to proper rock n roll in the conventional sense, then “Bad Mistakes” has a sort of fuzzy Black Keys insistence about its grooves.

There’s a cover here too. “She Don’t Love Me Now” is originally by Jesse Malin, but two things shine through. 1) Hollis Brown own it on this version and 2) you can see, right there, why Adam Duritz from Counting Crows moved heaven and earth to get HB on the road with the band.

The fact that this isn’t going to wait to be told what genre lines it should work on is underlined by not only the music to the closing “Go For It” – funky, and a bit bluesy, in the manner of John Butler Trio – but also its words: “sun came up on the world today,” it chides. “you slept until noon….”

The inference is obvious, but lets spell it out. “You want something? Go get it. Don’t procrastinate.” That’s writ large through “Ozone Park” and it’s a message that will resonate, just like this record will. Wherever in the world you are from.