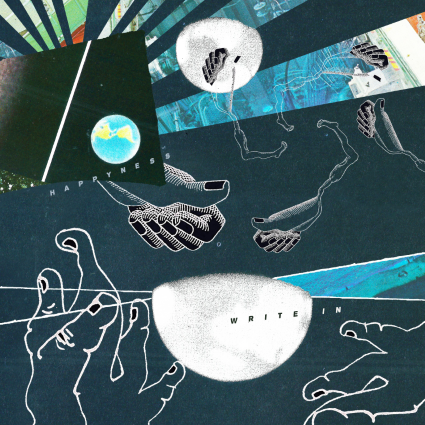 Damian gives write in a glowing write up

All three members write the songs and are known for swapping roles within the studio.`Write In` is the follow up to 2014`s debut album `Weird Little Birthday.”

We get a build up of guitar, bass and then drums before Jon’s vocals join in on the opening number `Falling Down”. A slow build but well worthwhile as we get our first taste of this dreamlike pop outfit’s new offering.

`The Reel Starts Again (Man As Ostrich}` is played in a similar vein before be get a slightly harder edge on `Anytime` which benefits from some hazy slightly off kilter guitar with wonderful laid back vocals layered on top.

Piano notes open out `Through Windows` before the vocals are talked and sung almost in a challenging way with some distorted guitar or maybe synth joining in. A complicated but yet simple song, that works really well.

`Uptrend_Style Raids` has a jangly guitar with hushed almost whispered vocals poured over a steady bass and drum beat with very prominent shimmering cymbals fleshing and filling out the sound.

A short but sweet Byrds cum Beach Boys type offering comes with `Bigger Glass Less Full` before the laid back `Victor Lazzaro`s Heart` follows. A breathtaking melody to just sit back and let wash over you. I really enjoyed this tune and the intricate way it was structured. We get some great hooks, harmonies and an enticing chorus with the wonderfully upbeat `Anna, Lisa Calls` before again a more laid back piece of work in the penultimate track `The C is A B A G.` The release is closed out with the epic `Tunnel Vision On Your Part` which incorporates all this is good about this band. The sharp intelligent lyrics shared over some intricate, melodic and delightfully well structured musical soundscapes. They reminded me of all the superb West Coast groups such as Moby Grape, The Flamin Groovies, Love, Strawberry Alarm Clock and Quicksilver Messenger Service – almost retro or nostalgic at times but with their own twist on things.

The title of the album is `Write In` which is a noun for a vote cast for an unlisted candidate by writing their name on a ballot paper. I would certainly be casting my vote for these guys in any ballot.