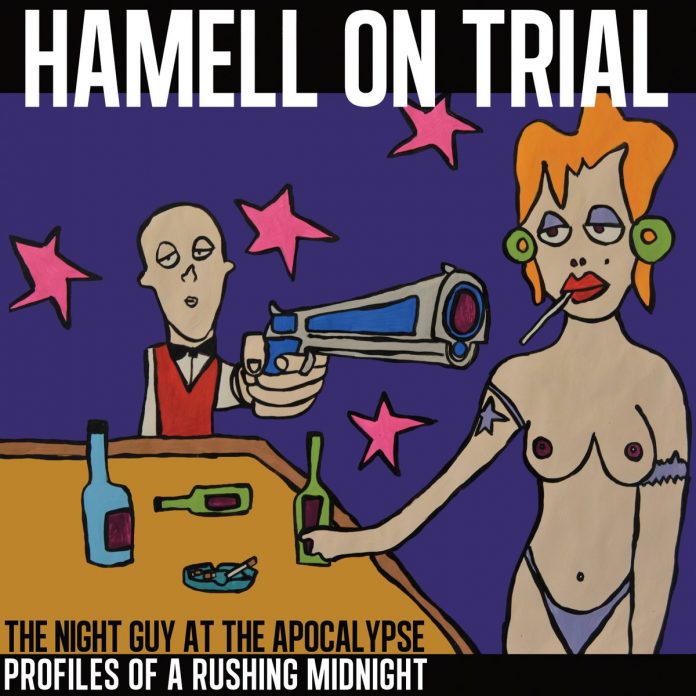 I have recently started playing online Scrabble with a friend of mine.

She assumed – wrongly – that I’d be somehow good at the game. Suffice to say I don’t have the imagination for it, can’t see the words and I’ve been thrashed at every turn since we started our matches.

I was considering this the other day when I was watching Hamell On Trial play a show, his use of language – and much of it is blue – is totally unlike anyone else. He always finds an angle, a way to tell his stories that no one else would think of, not for him you suspect, blankly staring at the tiles on his phone and only seeing the word “the” (or “sexy” to be fair, which I’ve played about 20 times, someone call Freud for me?).

To be truthful, that show the other night was – despite the fact I’ve been a fan for getting on for 20 years – the first time I’d seen HoT, and I was totally in awe of the entire 90 minutes. He is truly (even allowing for the fact this word is so overused it means nothing) unique. Indeed, I was moved to tweet after the gig that “I may have seen the greatest thing in the world”.

Which brings us to this. His new album. The follow-up to last years “Tackle Box” and a record that – as he put it onstage – “was to get away from politics” – “…Box” had dealt with social injustice in a quite remarkable way, this was to be a storytelling one.  Essentially, a return to the sort of scenarios set up by his “Choochtown” record, if you will.

Ed Hamell – the man who is the force of nature who is Hamell on Trial – used to be a bartender in a tough part of New York, so the regulars at The Apocalypse might well be more based in truth then they usually might be. Whatever, the bleakness amongst these tales makes this one of Hamell’s most political albums to date. Far from steering away from it, these characters are so disenfranchised, left behind and beaten down by the modern world, it is a comment on the injustice of the 1%.

“ The Night Guy at the Apocalypse Profiles of a Rushing Midnight” is an astonishing record. “Slap” at the start, which deals with vigilantism. If the violence inflicted on the abusive landlord and the paedophile priest, is one thing, but by the end its “he was a lawyer or CEO, jesus, I don’t fucking know….he didn’t do anything overtly bad, it was the fucking smirk he had…..” and never better is the casual violence and brutality shown.

The bluesy “Toast” is a tender (in as much as this is ever tender) moment given to those who have been lost, “Love At First Sight” is worthy of Tom Waits, and is more or less spoken word. “Rollin’ With Icarus” is likewise and is like no song you’ve ever heard in the conventional sense.

“Aggie And The DA” is more your typical singer/songwriter thing (actually there is a flavour of Anti-Flag’s acoustic punk here) but the imagery and the story is somewhere beyond X-rated, while the world is just dystopian.

“Bar Fight” is almost catchy – in as much as a song about killing someone in a bar to alleviate the boredom can be. “Melting Snow (Kill Them All)” – the only one of these songs he played at the aforementioned live gig – is an excoriation of the modern world, from the people on social media “in mom’s basement spewing hate” and onwards to the President.

Best of all, though, is the quite brilliant “The Night Guy”. There are blockbuster series’ on TV that aren’t this good, or have a story this strong. “Too High” is an almost jazz affair. The old-time music hides lyrics that still have the power to surprise, despite what has happened on this album before.

“That’ll Be The Bloody Day” has a celtic punk thing going on, “Her Father”, which concerns itself with murder (“all the years of watching CSI and I’ll cover up my tracks”) keep the nihilism going. “Velcro” is backed what by what sounds like an old Casio keyboard and is a labyrinthine revenge vignette.

Indeed, so dark are the worlds on this record “Closing Time” almost acts as light relief – the character in this one robs his fathers shop and ends up in bed with his mother and sister. And if that is the funny one, then good God…..

“The Night Guy at the Apocalypse Profiles of a Rushing Midnight” is not an album for everyone. In fact, Hamell on Trial surely knows this himself. Most people are going to recoil in horror by the end  of the first song.

The rest of us, those that understand the point, or even if you just appreciate plain old incredible linguistics, have found one of the albums of the year. Even if you’d give the bar a wide berth. This is truly amazing, in every sense. Just don’t play it at your next party – unless like me you find the thought of a party so abhorrent that you’d like to clear the room ASAP.