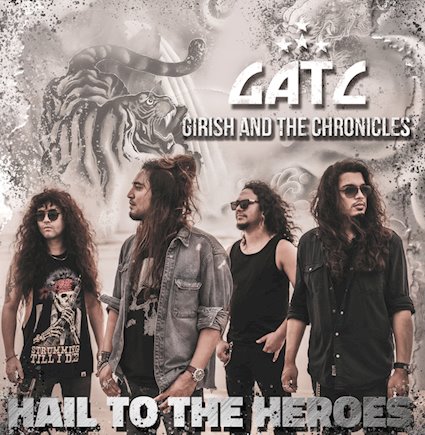 There are certain records that I have to review out of courtesy to the 14 year old kid that was so obsessed with rock n roll I went to the record shop in Solihull in 1990, on the bus after school just to buy Poison’s “Unskinny Bop” single. Or, out of respect to the 15 year old who’s late mother, who never swore in her life (this is literally true in my mother’s case) and yet still marched into Virgin Records in Birmingham and said “excuse me, do you have a copy of ‘Screw It’ by Danger Danger?” and in honour of the college kid who used to go to Reddington’s Rare Records in Birmingham with his best mate and buy anything with the red and white Atlantic sleeve.

Girish And The Chronicles is one of them, but it tells a greater truth too. The band, led by Girish Pradhan are, I think, the first Indian band that have had their album reviewed on these pages, and that in itself is a mighty thing. It is surely wonderful to think that someone in the city of Bengaluru – which according to Google Maps is 6000 odd miles from where I am right now, had the same music as me.

The opener “Primeval Desire” is everything we’d have loved back then too. More Cathouse than Rainbow (if you know, you know…..) it is Ratt-like, but it’s proper metal. The way we liked it, and like it still. Like it would cheerfully take your girlfriend home but it would beat you senseless if you kicked off about it.

And basically, that’s the vibe throughout. This isn’t Tuff, its tough, if you will. “Children Of The Night” thunders and blusters, “I’m Not The Devil” has just enough NWOBHM that it could have been off mid-period Priest before they came back with Painkiller – but it has enough pout to be pretty too, as the huge sounding “Love’s Damnation” proves. You don’t get this much bass groove if your balls aren’t swinging – and you don’t write a chorus this big if you don’t mean it.

“Clearing The Blur” does a bit of what we might call “modern AOR”, more like latter day Hardline than the 90s version, and if in all honesty, “Lovers Train” gets a little to like Def Leppard for my tastes, you can’t argue that Joe and the lads had a formula.

GATC trump card is Girish himself actually, Its difficult to imagine him doing anything other than roaring in a metal band, and his chest beating is somewhere between David Coverdale, Glenn Hughes and Stephen Pearcy. On “Rock N Roll Jack” (and I assumed some kind of AC/DC pastiche – it isn’t) he is all three.

This is an interesting band because there’s room for growth. FM would be proud of the title cut for example, and “Shamans Of Time” is absolutely resolute about the need to bring the power ballad back – except, it does an about face and neatly turns itself into a Led Zep thing, floating along in a kind of eastern haze. “The Heaven’s Crying”, likewise, although it doesn’t work quite as well as the overt rockers, is a decent stab at something “prog”.

Pradhan is in an international collective, Firstborne, with Chris Adler, and the Lamb Of God fella is on the last one. A feisty little groove metal tinged romp, called “Rock N Roll Fever”, and everyone here has come down with a case, it seems.

It is worth reminding yourself that even in this fractured, divided world, whatever our leaders think, there’s more to unite us than drive us apart. The record shops in that intro have gone, the friendship that is mentioned still endures. That’s what music does. Maybe “Hail To The Heroes” is an example of that, or maybe its just a really good – and really, really muscular – hard rock record? Either way, its ace.