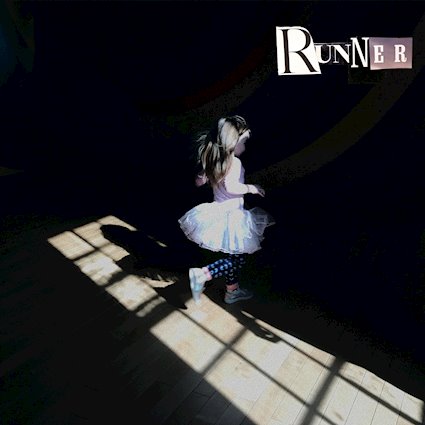 Tony Bucci, the singer, and guitarist behind Broken Field Runner, has spent the past three years working on a musical self-portrait. Instead of one full album he has sought to capture the different sides of his song writing in three distinct EPs. `Runner` the final offering is probably the closest release of the three to what people might have already expected from a BFR release, says Bucci. “These songs were written just before and during the height of the pandemic when Nazzo [drummer Alonso Figueroa] and I started to feel more comfortable with being in the same room again and reflect a return to my musical roots.”

This release begins with `Home Is Where You Kill Your Plans` which is a bit of a bizarre opener. A kind of train of thought come harmonised eulogy for an elderly deceased relative which had D.C.R. Pollock on additional vocals. The oddly named `Baby Satan` according to the singer is about loving and raising a baby even if that baby is Satan. That said it`s a delightful uplifting breezy breath of enchanting indie pop with pounding drums and jangly almost skewered guitar riffs. The vocals at times are a little shouty but really suit this number.

`Save You` was written for two good friends of singer Tony Bucci who experienced a devastating loss. It has some blistering guitar chord riffs with vocals that express a sense of helplessness with the line “nothing I can do to save you” running throughout the track and the thoughtful sentiment “You are the sun in my horizon / the moon is a lighthouse watching over the cliff / there’s a shore / in the distance a few miles more / called acceptance’” shared at the end of the number. We have a more reflective rumination with `Hair In My Mouth` which may or may not be about a past romance. It`s a mid-paced thoughtful slice of foot tapping indie pop.

The singer has shared that `In the Sunshine` is about self-investigation, loss, and sleep walking through depressive episodes, but also about approaching a situation you think you can predict the outcome of and getting a different response. A number written directly in response to a scene from the HBO documentary called I’ll Be Gone In The Dark about the true crime podcaster turned investigative journalist Michelle McNamara’s search for the Golden State Killer that ultimately leads to her death. It`s where her husband Patton Oswald is reacting in real time to her death. He asked how he will ever be able to break the news to his daughter and the response from her school psychologist was something like, “you can’t tell her at night before she goes to bed. You’ve got to tell her in the sunshine.”  Thumping drums and an acoustic guitar lead us into and through this, despite its subject matter, quite heartening blustery submission. This six track extended play closes with `Move` another airy catchy earworm of a composition. A fairly light piece that sort of floats by.

There was so much to enjoy on `Runner` and I now have to check out the previous releases `Broken` and `Field` to gain the whole spectrum of these guys talents. But saying that `Runner` in itself is a captivating, glowing and inspiring standalone ray of Sunshine in what is a pretty dull and dreary opening day to Spring, here in Blighty.

Let Broken Field Runner race into your life and brighten up your day.