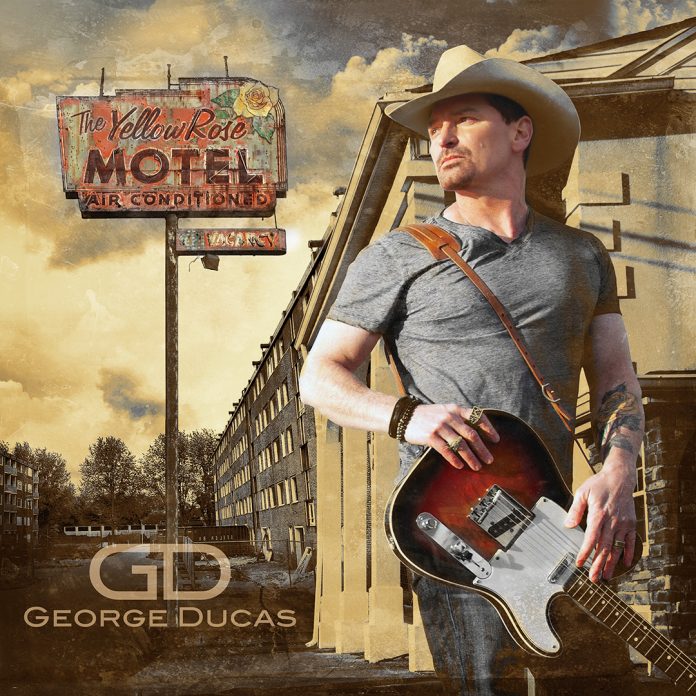 The best ones, they surprise.

The rest of it, it’s a bit of a mixed bag. Some great, some good and a couple of bits of fluff in truth, but then the last one hits.

A dark, bluesy thing with some utterly fabulous guitar. That, though, isn’t even the half of it. The story it tells, about a fella that falls in love with a prostitute and kills her and one of her customers in a jealous rage, is incredible on every level.

Ducas admits himself that he ripped this off from Willie Nelson’s “Red Headed Stranger”, but that’s cool, because as he also notes: “What anyone creates is rarely totally ‘original’”. Whatever, this is an astonishing way to end the album.

“Yellow Rose Motel”, elsewhere, does largely what I – as an Englishman – expects (and wants) this type of record to do. I want it to open me up to a stylised world of the honky-tonk and that’s what this does.

You can tell, too, that Ducas, as well as being an artist in his own right, is a celebrated songwriter. He’s penned songs for Garth Brooks and Trisha Yearwood among others, and right from “Don’t Leave Her Lonely”, it is evident that this is a record that will get a Gold Disc.

“….Lonely” plays it kinda safe. There’s a girl in a bar, and she wants to go home with someone, and it sounds like something off Billy Ray Cyrus’ “Some Gave All” (an album that I was the only 16 year old English kid that bought). “Country Badass” is better, because rather like Shooter Jennings’ seminal “Outlaw You”, it leaves you in no doubt what Ducas thinks of the fakers, never has “country” been said with more feeling outside of punk rock – listen to it, you’ll get what I mean).

“Baby Mama” benefits from a horn section, and its classily done, “Eastwood” was the lead single in the US, which taps into the idea that men want to be him and women want to be with Clint. I haven’t seen one of his films since that one with the Gorilla that I can’t remember the name of (I am a real film buff, can you tell). I can spot a mega hit, though, and this is one.

“I’m All In” is another. It recalls a bit of one of them Kid Rock country records, to be honest, and its one of the throwaway ones, but then you realise how catchy it is. “Old Timers” is kinda cool, no one outside of the US could pull it off, but in the hands of an American artist it does the job. “Unlove You” is more universal, all the sad arsed blokes around the world will have someone in mind here, and if this doesn’t win a Grammy for something then I’ll be staggered.

“I Got This” adds a banjo which is always fun, and a blues lick – Cadillac Three and Blackberry Smoke will be covering this – “Why Start Now” does a pop thing, and does it well, and for all the filthy piano, in “Cold Bud” it is just a homage to the US beer. I am teetotal, but some of my best mates will get outraged about the line “I don’t want to hear the latest news, about them imports and them microbrews”. In all seriousness it taps into some blue collar sentiment, even if it isn’t my world, I get it, I will say that “Preachers And Pushers” is better, because it largely avoids the cloying sentiment that many of his obvious peers treat religion with.

And those peers? Kendell Marvel, The Brothers Osborne, Brantley Gilbert and the likes, not the trad country. Instead this is unashamed country pop, and it does it well. Just start at the end, because then it excels.