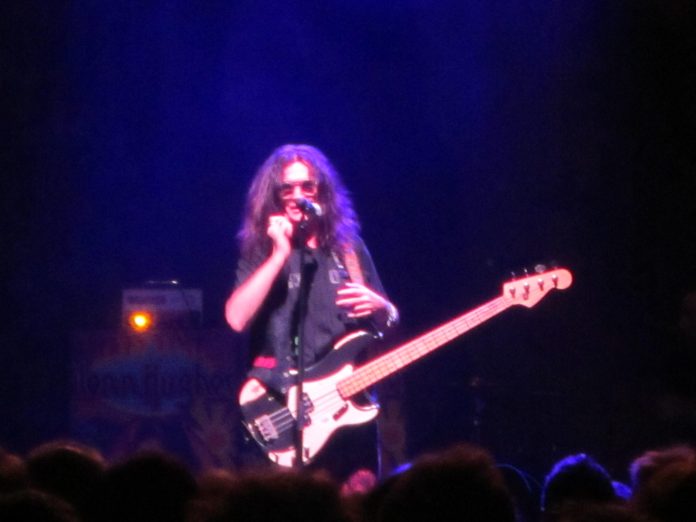 The lights dim and there`s a snippet of Glenn Hughes songs coming through the house pa as if being received through a crackling radio dial as Glenn and his band take to the stage.

There`s little introduction as the guy’s head into `Stormbringer` from Deep Purple`s 1974 album and it`s as if a storm really is brewing. We even get a couple of Glen`s trademark screams for good measure. This is the last show in as near as damn it the singer`s hometown and he seems genuinely happy to be here. He shares that this will be his last show of the Classic Deep Purple Live events but he`s looking forward to a new phase in his life fronting the musical collective The Dead Daisies.

`Might Just Take Your Life` and `Sail Away` follow with the drums of Ash Sheehan and Vince DiCola`s blistering organ a real highlight on the former track. The rolling `You Fool No One` blends into the rocking `High Ball Shooter` with Soren Andersen`s stunning guitar riffs.       We also get an obligatory drum solo. I have to say I really hate drum solos and feel they should be left where they belong, back in the seventies.

1975`s Coverdale / Hughes co-write the quite soulful `You Keep On Moving` gets an airing and has this packed audience all singing along. `Getting` Tighter` is blasted out before the singer talks about guitarist Tommy Bolin, whose drug overdose seems to have been the catalyst for Hughes to make changes in his life. He then plays a song dedicated to him that he plays at every one of his live shows `Mistreated` which again has this frantic crowd singing along.

The show closes out with the classic `Smoke On the Water` which also incorporated a couple of verses of `Georgia On My Mind.` It doesn`t take long before the troupe return and play a stunning version of the timeless `Burn` before sending the faithful into an almost euphoric state with a scorching `Highway Star` The band take their deserved bows after this two hour long masterclass of Classic Rock. It was wonderful to relive some definitive markers in rock history with a set of gifted musicians tonight, but I have to concur with Mr Hughes and am really looking forward to his next musical chapter with his new outfit.